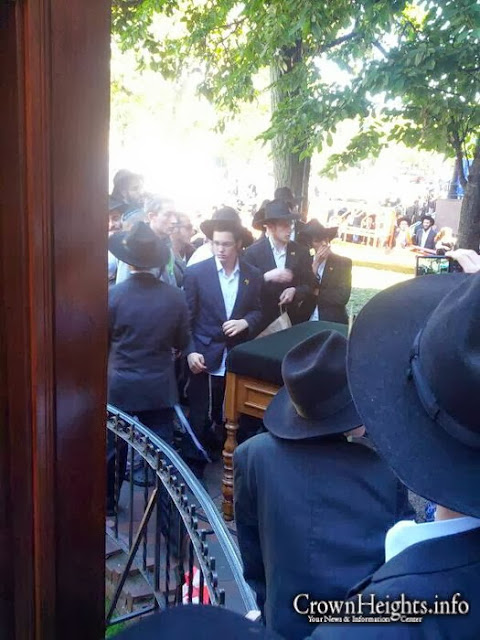 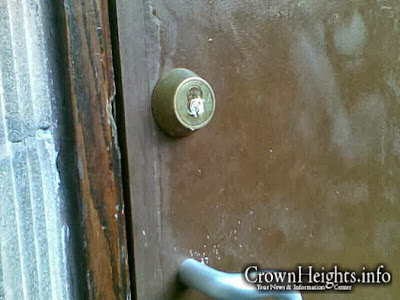 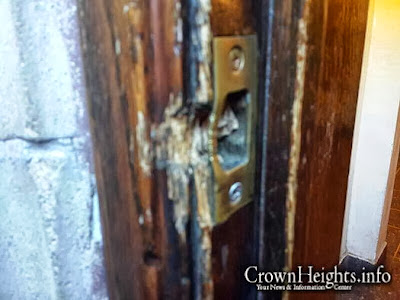 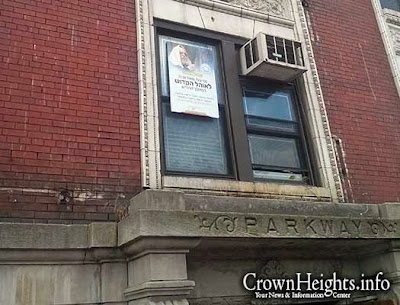 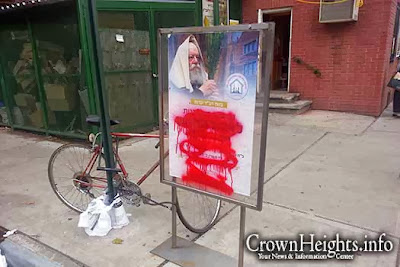 Wrapped in a Talis, a group of Tzfatis smashed through the front door of 770 yesterday to reenact the distribution of dollars, which the Rebbe would do every Sunday between 1986 and 1992. This incident caps month-long terror campaign in which the Rebbe’s Library was broken into, a Gabbai was beaten up and Tishrei guests were threatened not to visit the Ohel.

This shameful practice of reenacting the distribution of dollar in front of the Rebbe’s Room in 770 has not been seen in over 10 months. It last occurred during the month of Kislev; a group of about 700 Tzeirei Hashluchim was visiting the Rebbe’s room, when the zealots tried to prevent them from passing and a massive brawl ensued.

Following that incident, a decision was made by Aguch to put an end to this absurd practice. Guards were hired and police were involved, which ultimately lead to the distribution being relocated to ‘downstairs 770.’

On Sunday, a group of Tzfatis gathered in front of 770′s main door and, with gleeful smiles on their faces, covered themselves with a Talis and proceeded to break the door open.

The ringleader of the group was a Tzfati by the name of Yosef Yitzchok Tzinamon from Israel, who has been involved in many other incidents, namely the previous dollar distribution which took place last year.

The individual distributing the dollars was identified as Schneur Nemerovsky from Nachlas Har Chabad, Israel.

The man holding the Talis was identified as Mordechai Sibony. Mendy Hurvits from Israel, Levi Klein from Manchester, UK and Yosef Yitzchok Tzinamon were underneath the Talis and broke the door together. Carrying in the ‘mizbeach’ Chaim Grossbaum from Minnesota and Yosef Yitzchak Meifi from Nachleh, Israel.

Rabbi Chaim Boruch Halberstam, who – to his credit – has been keeping the ‘upstairs’ of 770 relatively calm, told CrownHeights.info: “they restarted the distribution of dollars only to show the new generation of fanatics who are visiting from Israel that they can do whatever they please.”

Copies of the surveillance video have been given to the police, and an investigation has been opened.

There has been much excitement over the establishment of a proper program for the thousands of visitors, who traveled from all over the world to spend Tishrei in the Rebbe’s atmosphere. Organized by a group of responsible individuals, they have been providing a respectful place for the guests to sleep and eat, alongside Shiurim, Farbrengens and meaningful programming.

This year the program was expanded to include a proper learning schedule for girls, including Farbrenges and Shiurim of their own. This drew the ire of Eshel and its leader Mendy Hendel, leading to one-way skirmishes.

In the past, guests who registered with Eshel where warned that they are not to attended any programming other their own, and they were prohibited from visiting the Ohel – all verbally. This year the Eshel administration got even more bold, enlisting the help of the ‘neighborhood Rabbonim’ to forbid the attendance of ‘any other programming’.

Signs warning that those who disregard their rules will forfeit their deposit money and will be removed from their apartments  were posted in the Eshel dining room and in their dormitories.

Throughout the months of Elul and Tishrei, it has been arranged that there be transportation by bus to the Ohel for those who wish to visit. Signs informing the guests of this have been placed around 770, only to be vandalized, sprayed with graffiti and torn down.

One such sign was hung from a window in the conference room above the women’s section of 770, and could not be vandalized due to its high placement.

But this did not stop a pair of enterprising Tzfatis, who at 7:00am last Monday scaled the building with the aid of a table and bench (after a previous attempt failed), ripped down the sign and left with it – all of which was captured on camera.

Seats on Rosh Hashana in 770 were in high demand, with little to no availability, so a group of Tzfati Bochurim decided to set up their own bench in one of the isles, blocking the passageway and creating a hazard.

Gabbi Rabbi Yosef Losh approached the group and asked them to stop what they were doing and remove the bench, which they refused to do.  Rabbi Losh went and got a few members of 770′s cleaning crew, who removed the bench themselves.

The Tzfatis reacted to this by beating up Rabbi Losh – throwing him to the ground while kicking and punching him.

After Yomtov, Rabbi Losh approached Rabbi Yaakov Schwei and Yosef Braun to complain. He demanded that the perpetrators publically apologize to him on the Bimah of 770.

Those involved in the beating were summoned to their offices, but they all steadfastly denied being involved in the incident. R. Braun suggested that the Tzfatis simply apologize to Rabbi Losh there in the office.

Rabbi Losh told CrownHeights.info: “I thought that they showed up to the Din Torah to just settle it, that what happened, happened. Once they denied hitting me I informed them that it is now between them and g-d and I do not forgive them.”

Holy Books in the Garbage

A week before Rosh Hashana, 20 new sets of the latest print of the Alter Rebbe’s Shulchan Aruch were donated to 770, and were placed on the Seforim shelves. By morning, all of the sets had vanished.

The Gabboim reached out to Aguch and requested a copy of the surveillance videos, in order to determine what had happened to the new sets. The video revealed a group of Tzfatis dumping the new volumes into large trash bags and taking them  across the street to 749 Eastern Parkway.

The video was then taken to Rabbi Yaakov Schwei and R. Yosef Braun, who summoned those involved and instructed them to return the Shulchan Aruchs.

Some of the sets were returned, but others were not since they had already been collected by the Dept. of Sanitation’s garbage trucks. Braun ordered them to pay the cost of replacing the sets that were lost.

The group of Tzfatis demanded that their names and the surveillance video not be publicized, so an agreement – in which they promised to not do such things again and not be involved in ‘terror’ – was drafted. All but one signed, and after much convincing he finally signed as well.

CrownHeights.info learned that these Bochurim took issue with the new prints of the Shluchan Aruch because they refer to the Rebbe with ‘Zecher Tzaddik Livrocho,’ and therefore sought to destroy them.

It is currently being looked into whether they were involved in any of the other incidents.

CrownHeights.info has refrained from publishing the actions of this minute group of rabble-rousers, and in fact since last year nothing has been written, all in the hope that the Hanhala of the Yeshiva take decisive actions against these individuals who reside in their dorms.

But with their actions becoming more and more bold, our silence might be interpreted as some form of condonation of their activities.

We cannot remain silent as the Rebbe’s holy Shul is overrun by those who mock him, go against everything he stood for, and lash out violently against those who stand in their way.


CrownHeights.info
Posted by joe levin at 7:34 AM