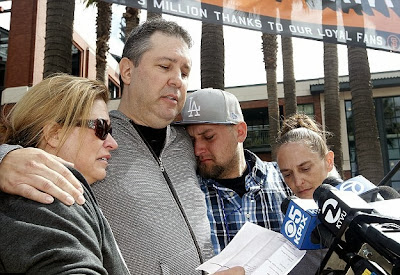 Jonathan Denver of Fort Bragg was stabbed to death Wednesday night after the San Francisco Giants game just a few blocks from AT&T Park. His family spoke out Sunday in an effort to get a conviction in his case.

Robert Preece, his voice quavering at times, spoke in front of the ballpark's iconic Willie Mays statue before the Giants played the San Diego Padres.


"You all must understand how incredibly difficult this is and has been for me and my family," Preece said.
He was flanked by family members who handed out fliers to fans streaming into the stadium.

The fight Wednesday night ended with the death of his 24-year-old son, Jonathan Denver.

"Losing a child is a heartache no parent should have to endure," Preece said. "My son Robert lost his best friend and brother."

Police say Denver was with his family dressed in Dodgers gear leaving a bar at Third and Harrison streets when words were exchanged with some Giants fans. A fight began and Denver was stabbed.

Michael Montgomery of Lodi was arrested but later released due to a lack of evidence. The 21-year-old's father says his son told him that Denver hit him over the head with a chair and he stabbed him in self-defense.

A second suspect was questioned and released by police Friday. Two others were being sought.

Preece, who works as a security guard for the Dodgers, made this public appeal for witnesses to come forward.

"The Montgomery family is likely suffering as well," Preece said. "I am making a plea to the public asking that anyone who may have witnessed the incident to come forth so that both families can have some measure of closure. I believe that someone may have videotaped the incident and can help us discover the truth."

Denver's mother, Diana Denver, said in a prepared statement that she was angered by Montgomery's release and what she called "the negligence of our justice system."

The victim's aunt, Jill Haro Preece read the mother's statement after Diana Denver said she was too emotional to address the dozen of cameras and reporters assembled in front of Mays' statue.

San Francisco District Attorney George Gascon said police had not spoken with any independent witnesses who may have witnessed the fight, which is what prompted Preece and his family to make their public plea.

The family passed out flyers before the Giants game asking for information in the crime.

During the game, a rare appearance by a smiling Bryan Stow, the Giants fan who was brutally beaten outside Dodger Stadium in 2011. He has permanent brain damage. This week the Giants held fundraisers for Bryan.

"I want to thank all those that have sent their condolences, including the Stow family, my family at Dodgers," Preece said.

The flyers being passed out Sunday urge the public to call the San Francisco Police Department or the district attorney's office if they have any information.

Police say they are still investigating the case.