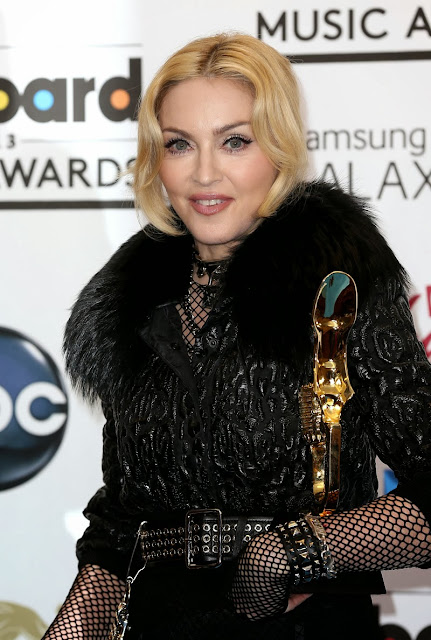 It's the first time she has been spotted out since the passing of a significant leader of Kabbalah, the religion she devotedly follows.

And Madonna was looking casually classy as she arrived at Kosher eatery Prime at New York's Bentley Hotel on Friday to recognise the Jewish holiday of Sukkot, just four days after the passing of prominent Kabbalah Chief Rabbi Philip Berg.


The 55-year-old chart queen was joined by three of her children - Rocco, David and Mercy - who all wore neat white outfits to join their famous mother on the religious occasion.

Madonna slipped into a pair of cropped and distressed blue jeans, laden with fashionable holes and scruffs.
She wore chic black and silver heels and kept warm on the chilly New York City evening with a black patterned scarf and a black trench coat coverd with decorative zippers.

The Like A Virgin singer's blonde tresses were pulled back in an easy ponytail with a flattering side part.
The star was escorted into the upscale Prime restaurant at The Bentley Hotel by her driver, whilst her children stayed close.

Mercy, seven, looked utterly cute in a white skirt and cardigan with a grey skull print T-shirt beneath it.

David, also seven years old, was a young gentleman in white suit trousers and a white shirt, whilst 12-year-old Rocco Richie swung his cap around backwards to keep his all-white ensemble in the hip zone.

Despite Madonna’s casual attire, the star will no doubt have taken the service seriously.

The songstress has been a follower of Jewish mysticism since the 1990s, frequenting the Los Angeles Kabbalah Centre.

She has been spotted attending several Kabbalah services in Manhattan lately, accompanied by her 25-year-old boyfriend Brahim Zaibat.

Rabbi Berg was the founder of the Kabbalah Center in Los Angeles, which is frequented by A-list Hollywood stars including Madonna herself, Ashton Kutcher, his ex-wife Demi Moore, and also Paris Hilton and Britney Spears in the past.