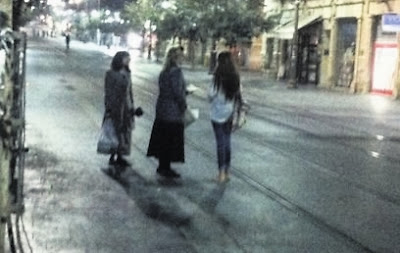 Jerusalem residents who went on the town recently, on the eve of Rosh Hashana, the Jewish New Year, were surprised to see two ultra-Orthodox women in their 50s touring bars in the city center at around midnight, as part of a spontaneous campaign aimed at convincing young secular women to become religious.

The haredi women were eventually driven away by partygoers after trying to prevent young girls from entering a pub.

Eyewitnesses say the two women walked around the city center carrying bags filled with Psalms and leaflets, which they handed out to young secular women. They asked them to return to their homes, to avoid desecrating the holiday and to dress modestly.

The women began their tour at Zion Square, where they attracted many people who gathered around them to listen to what they had to say or argue with them.

Later, they approached young women hanging out on a bar on Yoel Moshe Salomon Street and tried to start a conversation with them. The young women ignored them, but the haredi women continued talking to them against their will. Several men demanded that they leave the place and stop harassing the young women. They walked out, accompanied by partygoers who began filming and taking pictures of them.

The two women tried to start another conversation with other secular women, and one of them even grabbed a young woman by the hand. Some eyewitnesses intervened and tensions began running high, as some began throwing the leaflets at the haredi women and demanding that they leave. The women said they were entitled to continue their activity and threatened to call the police.

Only when they noticed that some people were taking pictures of them, causing a further desecration of the holiday, the two women fled towards the Mea Shearim neighborhood with some of the youngsters chasing them. There were no reports of physical violence in the incident.

"We don’t enter haredi neighborhoods and try to convince them to leave religion, so they shouldn't come to us," complained a young secular man.

The two women, who were likely not operating on behalf of any haredi faction, are not the only ones trying to lecture seculars in the capital to adopt a conservative haredi lifestyle. About half a year ago, shoppers at Mahane Yehuda Market complained about a group of haredi women who demanded that customers wear modest clothing to the market. Merchants declared a war on the "chastity squad," and the women have not been seen at the site ever since.