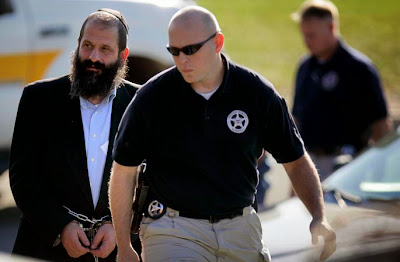 Reade plans to schedule another hearing to decide possible punishment. She made clear her displeasure, at one point accusing Cook, president of the Iowa State Bar Association, of wasting her time with a ridiculous argument.


Assistant U.S. Attorney Peter Deegan started looking into the matter after a juror complained this month that he and others had been contacted by private investigators working for Rubashkin, who is preparing a second appeal of his conviction and 27-year prison term. The juror said that Rubashkin's daughter showed up unannounced at his home with an investigator, making an emotional appeal for her father's freedom.

"It's nothing short of juror harassment and a worst-case scenario," Deegan said.

His inquiry also revealed that Cook's firm spoke with three jurors and an alternate in December 2009, a month after the verdict. Cook was part of Rubashkin's defense team at trial.

Federal authorities raided the Agriprocessors plant in Postville in 2008, arresting 389 immigrants who weren't in the country legally — at the time, it was the largest such enforcement action at an American workplace.

Rubashkin was later accused of bilking a lender out of $27 million by submitting fake invoices that made Agriprocessors' finances appear healthier than they were. He was convicted on 86 counts of financial misconduct during a hotly contested trial that was moved to South Dakota because of extensive publicity.

Supporters of Rubashkin have argued that Reade should have recused herself because she helped plan the logistics of the immigration raid. They also say the sentence was too harsh for a nonviolent, first-time offender. A federal appeals court rejected those arguments, and the U.S. Supreme Court last year let the sentence stand despite a well-financed effort to convince justices and the public that Rubashkin, a Hasidic Jew, was the victim of injustice.

Wyrsch, whose firm was hired to prepare Rubashkin's second appeal, took responsibility for the recent contacts with jurors. He apologized but said he did not intentionally violate the rule, saying he believed the contact was permitted given that Cook's firm had already done so and it's allowed under federal court rules in South Dakota.

Wyrsch also said he did not hire the New York-based investigative firm and would not have authorized its work if he knew Rubashkin's family would be involved. The goal was to find out whether jurors were prejudiced, a major concern for Rubashkin's supporters, he said.

Cook said he believed Reade approved the contacts when she told jurors after the verdict that she was lifting the prohibition on them discussing the case with others. He said that as a 30-year trial lawyer and former federal prosecutor, he was aware of the rule and would never intentionally violate it.

"I've lectured on the rules," he said.

But Reade didn't buy that explanation, calling it "disingenuous, bordering on the ridiculous."

"You need to add a footnote to wherever you lecture. You are dead wrong and no reasonable lawyer would have interpreted what I said to give permission to lawyers to have contact with jurors," she said.

Reade said that she wanted written assurances from Rubashkin that he would not use any of the information gleaned from the recent juror interviews. She said the potential sanctions "will depend on what Mr. Rubashkin says."

Wyrsch said he doesn't believe the information is valuable and won't use it. But he said other Rubashkin supporters see it as important, and his firm is considering withdrawing from the case due to concerns that it won't be able to control their actions.
Posted by joe levin at 2:18 PM