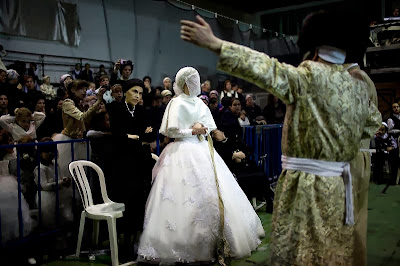 Marriage and Divorce in the Jewish State: Israel’s Civil War

Until modern times, an agunah, a “chained” or “anchored” woman, was usually a wife whose husband had been lost at sea or killed on the battlefield; rabbis wrote circles around the question of how to liberate a woman whose husband had disappeared but could not be proved dead. At what point could she be declared a widow, free to remarry? Today, however, agunot are primarily Orthodox women whose husbands are get refusers.

In traditional Judaism, a divorce is enacted when a man gives his wife a get, a writ of divorce. Only the man can write the get, and should he refuse, his wife stays married — no exceptions. Husbands may withhold a get as a form of blackmail, to exact better financial settlements or child-custody arrangements. They may be unable to bear letting go of their beloved wives. Sometimes they are just sociopaths.

In a study completed in 2011, the Washington, D.C., Jewish women’s activist Barbara Zakheim identified 462 agunot in the United States, victims of get refusal by recalcitrant husbands.

There are probably many more, as victimized women in tightly knit communities, whether in Brooklyn or in Jerusalem, are under tremendous pressure not to cooperate with secular divorce courts or with feminist activists. Some have been brutalized or beaten by their husbands, yet the default position of many in their communities is that responsibility for shalom bayit, peace in the home, falls on the woman.

What to do about get refusal has become, at last, a major issue of concern for the Modern Orthodox community. A number of Orthodox women, in the United States more than in Israel, have allowed themselves to become spokeswomen for the cause. Several were featured in Beverly Siegel and Leta Lenik’s 2011 documentary, “Women Unchained.

Earlier this year, for the first time, a Connecticut civil court upheld a prenuptial agreement that prescribed a financial penalty if the husband withheld a get; the husband in question relented and freed his wife. Also this year, New York University hosted a major conference on the agunah problem, in which several important rabbis suggested the formation of a new beit din, or rabbinical court, that would be more sympathetic to women seeking divorces. A beit din cannot grant a divorce, but it can attempt to pressure a recalcitrant husband by, for example, commanding his ostracism from the community.

“Marriage and Divorce in the Jewish State: Israel’s Civil War,” by Susan M. Weiss and Netty C. Gross-Horowitz, is a timely and useful book — even if, by scholarly standards, it has to be judged lacking. It largely concerns divorce cases handled by the Center for Women’s Justice, a Jerusalem not-for-profit organization, yet it is co-written by Weiss, one of the center’s founders. Scholar-activists are often best suited to write about the subject they know so well. But Weiss and her co-author are undone by their loyalties.

The wives in their book are drawn with love and sympathy; they have traits like “poise” and “aplomb.” The husbands are homely and distasteful, and the husbands’ lawyers are even worse. One is “the biggest, the best, and the most expensive gladiator of them all.” Another is “meticulously dressed, with a full head of blond hair slicked forward like a 1950s movie star.” The writers would rightly cry sexism if a woman were reduced to her coiffure like that.

The book, which discusses the legal travails of six Israeli women, is really a long brief for the good work of the CWJ, and an attack on the legal system that so often thwarts the center’s efforts. The authors make little effort to conceal their biases.

They are sloppy in other ways, too. Informed that some people are described by pseudonyms, the reader is never really sure which people are called by their real names. And if some lawyers and judges are identified by pseudonyms, why? They are public professionals, with no expectation of privacy. I wondered if sometimes the authors held back to avoid upsetting members of the legal profession with whom they have continued dealings. Understandable if true, but not scholarly.

Nonetheless, this is a compulsively readable book, gory with injustice. Because of a 1953 law granting the rabbinic courts jurisdiction over family law, even totally secular Israeli women need a get if they are to remarry, and they must take any conflicts to the courts of three Orthodox male judges. Even “Efrat,” who was married in a civil ceremony in Cyprus, has to plead her case before Orthodox judges. These judges have some authority over alimony and child-support issues, too, and they frequently issue rulings in conflict with the more progressive civil courts. Jurisdiction can become totally confused.

Even worse, the rabbis can base their rulings on any ancient or medieval sage who appeals to them that day. “Perhaps the most egregious violation of human rights in Israeli rabbinic courts,” the authors write, “is the sheer chaos that reigns there…. [E]ven a veteran divorce advocate, if asked on what grounds a rabbinic tribunal will order a husband to give a get, will hesitate and search for an answer.”

Meanwhile, the rabbinic judges, many of them rank misogynists, can conduct hearings however they wish. The books most haunting story involves “Allison,” whose husband persuaded the court to watch videotapes of her walking around her own house in her underwear to demonstrate her loose behavior. But many women would prefer such an indignity to the ordeal of “Dahlia,” who had to refuse two offers of marriage during the 29 years that her husband withheld a get. During decades in rabbinic courts, she suffered such insults as having an important hearing about alleged domestic abuse canceled when a judge simply failed to show.

And in the end, should a rabbinic court order a husband to give a get and he refuses, all the court can do is throw the husband in jail for not complying. If he is willing to endure jail, he can still keep his wife chained. The Orthodox rabbinic establishment, which controls marriage in Israel, will not allow her to marry another man; should she remarry with a liberal rabbi, or in a wedding abroad, her future children will be deemed mamzerim, bastards, unfit to marry anyone who is not a bastard.

The Orthodox establishment in Israel is reputed to keep a blacklist of such bastards, to ensure that they don’t pollute the kosher marriage pool.

And here we arrive at what I take to be the heart of the matter. The fear of bastardy runs very deep in Orthodoxy.

The first charge hurled at agunah-rights activists is that they are creating mamzerim by forcing divorces on men who don’t want them, divorces that are thus invalid, then remarrying in illegitimate unions and procreating. Modern Orthodox rabbis are hard at work looking at ways to reread Halacha, Jewish law, to free women from stubborn husbands.

But if they declare certain women divorced, any children by future husbands will be stigmatized, by some portion of the Orthodox community, as bastards — unmarriageable from birth. It will take great bravery for women to decide that they don’t give a damn about the opinions on the mamzer-hunting, far-right fringes of Judaism. Modern Orthodoxy has shown such courage in fights over women’s prayer and spiritual leadership, but mamzerim present a far more daunting challenge.

The absurdity of a people being haunted by the bastard stigma points to the real problem described in “Marriage and Divorce in the Jewish State”: Religious law simply has no place in the jurisprudence of a secular democratic state. Since 1953, Israelis have tried to have it both ways, with secular courts and rabbinic courts attempting not to tread on each other.

When it comes to women’s rights in divorce, this compromise hasn’t been a success — it hasn’t even been a compromise. What the secular courts giveth, the rabbinic courts taketh away. In the United States, a woman without a get can still get a civil divorce. She may lose her standing in Orthodoxy, but if she doesn’t care, she can at least remarry. In Israel there is no civil divorce; a woman who wants to be free of her husband must renounce not just Judaism, but also marriage altogether. Thus, in Israel, the forced infusion of marital life with so-called Jewish values is destroying not just Judaism, but marriage, too.

Mark Oppenheimer, who writes the Beliefs column for The New York Times, is writing a book about the agunah problem.