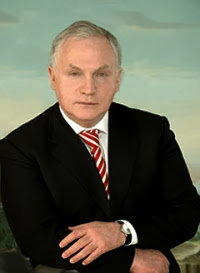 While the housing crisis in Israel is worsening by the day, in Caesarea construction is underway for a grandiose palace overlooking the sea, not far from the villa of Prime Minister Benjamin Netanyahu.

The proud owner of the most expensive mansion ever built in Israel, Jewish Russian oligarch Valery Kogan, bought and tore down seven villas in favor of his new home, which is being constructed on a property of 3.5 acres and designed in a style resembling the White House in Washington.

In an aerial photo, the impressive palace makes nearby villas look very small. Real estate experts estimate that the property is worth at least $100 million, making it the most expensive house in Israel.

"We've never seen such a huge investment in a house in Israel," says Eynav Makmel, a real estate agent specializing in the most expensive homes in Israel.

The entrance to the house resembles a luxury hotel of the highest standard, including Roman-style gold-coated pillars. The marble for the floor was designed in a special technique in the shape of flowers, and the tall palace doors were imported from Italy and include a golden engraving.

In general, gold is the dominant color in the house and in the entire compound. Even the fence surrounding the mansion will be covered with golden leaves and is estimated to have cost NIS 2 million (about $570,000) alone – the price of a four-room apartment in central Israel.

The house's living room and entrance hall are built on an area of about 1,000 square meters (10,800 square feet), allowing a view of the stars through a huge glass dome. It is surrounded by marble pillars, sports grounds and a luxurious kitchen with a 4-meter (13-feet) island topped with a huge chimney.

The flamboyant project began about four years ago, when residents of Caesarea's Hadar Street, where Benjamin and Sara Netanyahu's private home is located, spotted bulldozers destroying five villas on the street. Another two adjacent villas were purchased this year for NIS 27 million ($8 million), and the area is expected to serve as a tennis court.

An internal private road with a fancy square leads to the estate, which will be surrounded by sports grounds, gardens and orchards.

There will be no parking distress in the area, as the mansion includes an underground parking with enough place for 10 cars. In addition, the house will supply its own electricity from a private underground system.

Architect Yuri Pushinsky, who is planning the Kogan mansion, declined comment, noting that like all other workers taking part in the house's construction – he has also signed a non-disclosure agreement.

The last time he did it was four years ago, when he purchased the most expensive apartment in Israel – a 1,000-square-meter apartment opposite the Dolphinarium on Tel Aviv's Herbert Samuel Promenade, estimated at NIS 110 million ($31 million).

Kogan, 62, a Russian-Jewish businessman, is an acquaintance and good friends of Russian President Vladimir Putin. Kogan is known to evade the media and his fortune is estimated at some $1.75 billion, according to Forbes Magazine.

This mystery man made his great fortune with his own hands, and the mystery grows in light of the impressive leap in his fortune, at least according to Russia's Finance magazine. In 2007, the magazine ranked Kogan as the 499th richest man in Russia rich with a fortune of $90 million. Only one year later, he jumped to the 157th place with $600 million.

Most of Kogan's fortune and power is linked to the company operating Moscow's Domodedovo Airport, the largest in Russia, which is used by 13 million passengers a year. Kogan serves as chairman of the company's board of director.

According to the company's website, he served in the Soviet Navy and worked in the diplomatic service. He has an academic education in economics.