Just don’t ask him about the beard 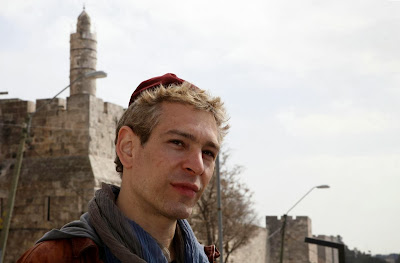 Matisyahu has never enjoyed chatting with the press. The 34-year-old Jewish music superstar, born Matthew Paul Miller, has always kept his interviews short and his personal life elusive, preferring to let his music – a funk-infused blend of reggae and rock, Jewish liturgy and hard hip-hop, speak for itself.
In a phone interview just before Sukkot to discuss three upcoming shows in Israel, on Sept. 23, 24 and 26, he was as tightlipped as usual. His reticence comes, however, as questions swirl over the former Hasidic Jew’s current relationship to Judaism, the evolution of his musical sound and his thoughts on returning to Israel after nearly two years away.

Matisyahu, who was raised a Reconstructionist Jew in Westchester, Penn., joined the Chabad movement in 2001 and burst onto the music scene in 2004 as a bearded, beat-boxing, Hasidic hip-hopper, looks and sounds very different these days. The black hat is gone, his cheeks are now clean-shaven, and his sound has made a palpable shift.

He snubs the questions as to why.

“I never really wanted to define myself in the first place,” he says, noticeably bristling. “At this point, I’m absolutely 100 percent opposed to defining myself. Nobody will get a clear answer from me now as to what it is that I am or am not.”

Matisyahu’s music was a watershed for both the reggae and the religious communities. He became famous offering an incredible, unlikely fusion of both faith and feeling that proved – via hit singles, performances on Letterman and Leno and concert halls packed with secular groupies screaming out Hebrew lyrics – that a religious Jewish artist could find mainstream success.

His first LP, “Shake Off The Dust… Arise,” was an irresistible blend of dancehall reggae and ska-punk woven into nigguns and psalms and sprinkled throughout with hip-hop beats. It was a modern meditation on faith and Jewish love, and Israelis, American Jews and secular listeners alike latched on to it.

He followed up with the even more popular “Youth” in 2006, which went gold. In 2007, it was reported that Matisyahu had left the Chabad-Lubavitch movement in favor of the lesser-known Karlin sect. “Light” was released in 2009.

In 2011, the Jewish blogosphere was electrified with commentary after Matisyahu posted a beardless photo of himself on Twitter with the accompanying caption, “No more Chasidic reggae superstar. Sorry folks, all you get is me.”

Matisyahu’s wife Talia still belongs to the Chabad movement, and the couple have three boys. Other shots of the singer have shown him with his hair dyed blond and his head without a yarmulke. His songs are still packed with Yiddish and Hebrew and declarations of Jewish love, and he has refused to directly address the questions about where he stands, faith-wise.

His latest LP, “Spark Seeker,” was released nearly two years ago, but Matisyahu has yet to perform its tracks in Israel. If his fans here want to know what’s going with the singer, these songs – catchier, more mainstream and significantly more varied than those from his earlier albums – offer plenty of clues.

“Even though the record is like two years old to me, it’s going to be brand new for people that are listening [in Israel],” he says. “Particularly, I’m looking forward to performing a song called ‘Shine On You,’ which is the last track.”

“Oh my soul has been so low/ Make them clouds fade to blue / So my love can shone on through / Shine on you,” Matisyahu sings in that track, accompanied by some seriously strong saxophone by Israeli religious saxophonist Daniel Zamir.

Other standouts on the album include the bubble-gum pop infused “Tel Aviv’n,” which both embraces the city’s secular nature while referencing the coming of the Messiah and ending with the lyrics of the Shema; and “Live Like a Warrior,” a bildungsroman of a song that implores, “Some things you should let go / They’re only gonna pull you down / Just like weight on your shoulder they are only gonna make you drown … We all got secrets people don’t know.”

Matisyahu recently wrapped a new album, which he won’t be playing from during his three concerts here, that he says is the newest and most imaginative sound he’s produced yet. “For me, it’s really been about blending and mixing and staying away from the pure,” he explains. His relationship with music, it appears, is as fluid and evolving as his own religious practice.

“This record is my most fresh in the sense of what’s current in music … It’s a very personal record, and it’s less about the ideas of Judaism and more about how those things relate to me and my emotional life. I really feel as a songwriter that I’m just starting to come into my own in terms of writing songs that are personal and that are emotional,” he says.

Whether crowds come to his concerts here for the music or to unravel more of the man’s mystery, Matisyahu says he is delighted to be once again performing in the Holy Land. On Monday, he will play the Shuni Amphitheater in Binyamina, followed by a show on Tuesday at the Tamar Festival atop Masada and a performance at Tel Aviv’s Zappa Club on Thursday.

“For me, it’s a special thing to play in Israel,” he says. “Being that I’m not Israeli, I’m an American Jew, I feel that I really want to be appreciated by Israelis for what I do.”