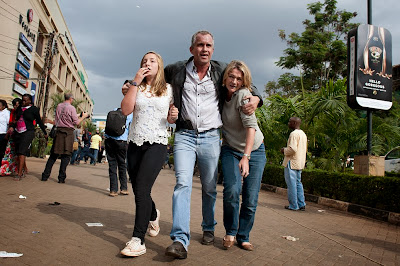 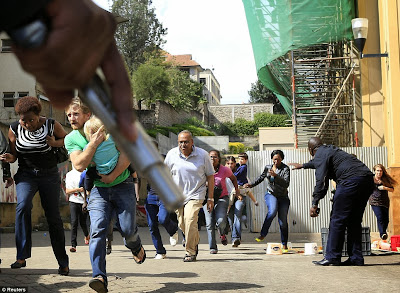 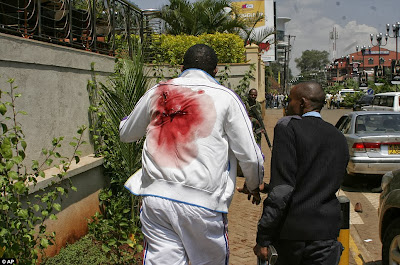 A large explosion rocked the Kenyan mall where Islamic extremists are holding hostages a day after attacking the upscale shopping center.

Associated Press journalists at the Westgate mall said the explosion Sunday afternoon was by far the largest in the 30-hour siege. There big blast was followed by silence.

An estimated 10 to 15 militant attackers are in the shopping mall holding an unknown number of captives, said Kenyan officials. The Kenyan military has gone into the four-story mall and there have been sporadic gun battles.

There are fears of a protracted standoff in which the terrorists use the captives as pawns.

Elite military units were inside the Westgate mall, and volleys of gunfire continued into the afternoon Sunday. Two wounded Kenyan soldiers were seen being carried out of the mall in the morning.

Kenyan security officials didn't - or couldn't - say how many people the estimated 10 to 15 terrorists were holding hostage.

Kenya's Red Cross said in a statement citing police that 49 people had been reported missing. Officials did not make an explicit link but that number could form the basis of the number of people held hostage.

Former Kenyan Prime Minister Raila Odinga told reporters at the mall that he had been told officials couldn't determine the exact number of hostages, amid indications that Israeli military personnel were providing Kenya's military assistance.

"There are quite a number of people still being held hostage on the third floor and the basement area where the terrorists are still in charge," Odinga said.

Kenyan security officials sought to reassure the families of hostages inside but implied that hostages could be killed. Interior Cabinet Secretary Joseph Lenku said the security operation was "delicate" because Kenyan forces hoped to ensure the hostages are evacuated safely.

"The priority is to save as many lives as possible," Lenku said. More than 1,000 people escaped the attack inside the mall on Saturday, he said.

Britain's prime minister, in confirming the deaths of three British nationals, told the country to "prepare ourselves for further bad news."

"It's an extremely difficult situation but we're doing everything we can to help the Kenyans in their hours of need," David Cameron said.

More than 175 people were injured in the attack, Lenku said, including many children. Kenyan forces were in control of the mall's security cameras, Lenku said. Combined military and police forces surrounded the mall in the Westlands neighborhood of Nairobi, an area frequented by foreigners and wealthy Kenyans.

CBS News chief travel correspondent Peter Greenberg happened to be in Nairobi at the start of the attacks, and described the Westgate as "a very large mall, with more than 80 stores and large grocery stores and banks" that is popular with locals and tourists alike. He said the attacks have been "terrifying."

Greenberg said many buildings in Nairobi, including the parliament building, have been placed on lockdown.

Somalia's al-Qaeda-linked rebel group, al-Shabab, claimed responsibility for the attack in which they used grenades and assault rifles and specifically targeted non-Muslims.

The rebels said the attack was retribution for Kenyan forces' 2011 push into Somalia. A few thousand Kenyan troops have been operating inside Somalia and near their shared border for a few years now battling Islamic militants.

Al-Shabab said on its new Twitter feed - after its old one was shut down on Saturday - that Kenyan officials were asking the hostage-takers to negotiate and offering incentives.

"We'll not negotiate with the Kenyan govt as long as its forces are invading our country, so reap the bitter fruits of your harvest," al-Shabab said in a tweet.

"This premeditated act, targeting defenceless civilians, is totally reprehensible," Ban said. "The perpetrators must be brought to justice as soon as possible."

Westgate Mall is at least partially owned by Israelis, and reports circulated that Israeli commandos were on the ground to assist in the response. Four restaurants inside the mall are Israeli-run or owned.

In Israel, a senior defense official said there were no Israeli forces participating in an assault, but the official said it was possible that Israeli advisers were providing assistance.

The official, speaking on condition of anonymity because he was discussing a classified military issue, would not elaborate.

Israel has close ties to Kenya going back many years. And in recent years, Israel has identified East Africa as an area of strategic interest and stepped up ties with Kenya and other neighboring countries, due to shared threats posed by al-Qaida and other extremist elements. In 2002, militants bombed an Israeli-owned luxury hotel near Mombasa, killing 13 people, and tried to shoot down an Israeli airliner at the same time.

"We have received a lot of messages from friendly countries, but for now it remains our operation," Lenku said, adding later: "I want to assure Kenyans that our security agencies are fully in control of the situation."

President Uhuru Kenyatta - who said he lost his nephew and his nephew's fiance - visited a hospital Sunday where he shook hands and exchanged words of encouragement with victims. M.P. Shah Hospital Chairman Manoj Shah said Kenyatta appeared visibly distraught at hearing the feelings of all the patients.

"He looked at many of the patients who had bullet wounds, who were suffering shrapnel damage. He shook their hands and wished them well," Shah said.

Shah said his doctors received 128 patients and performed 28 surgeries to remove bullets and shrapnel in the first 24 hours since the attacks began Saturday.

"We have at least two critical patients currently, one with bullets lodged near the spine," Shah said. He added that many of the victims_and four of the 19 fatalities at this particular hospital_were children.

Kenyans and foreigners were among those confirmed dead, including British, French, Canadians a Ghanaian and Chinese.

A 38-year-old Chinese woman was killed in the shopping mall "terror attack," the Chinese Embassy in Kenya said in a statement Sunday.

Her son was injured in the attack and in a stable condition in hospital, according to the statement posted on the embassy's website.

Ghanaian poet and former chairman of the council of state Kofi Awoonor died after being injured in the attack, Ghana's presidential office confirmed. Ghana's ministry of information said Awoonor's son was injured and is responding to treatment.

Kenya's presidential office said that one of the attackers was arrested on Saturday and died after suffering from bullet wounds.

The United Nations Security Council condemned the attacks and "expressed their solidarity with the people and Government of Kenya" in a statement.

There was some good news on Sunday, as Kenyan media reported that several people in hiding in the mall escaped to safety, suggesting that not everyone who was inside overnight was being held by al-Shabab.

Cecile Ndwiga said she had been hiding under a car in the basement parking garage.

"I called my husband to ask the soldiers to come and rescue me. Because I couldn't just walk out anyhow. The shootout was all over here - left, right- just gun shots," she said.

Security forces had pushed curious crowds far back from the mall. Hundreds of residents gathered on a high ridge above the mall to watch for any activity. Police lobbed multiple rounds of tear gas throughout the day at hundreds of curious Kenyans who gathered near the mall.

Four American citizens were reported injured in the attack. The wife of a foreign service national working for the U.S. Agency for International Development was killed, U.S. officials said. No details about the injured Americans were released by the State Department, which cited privacy concerns. Consular officers were in contact with the injured and were providing appropriate assistance, a State Department official said.

Secretary of State John Kerry called the attack "a heartbreaking reminder that there exists unspeakable evil in our world which can destroy life in a senseless instant."

"Attacks like this can't change who we are, a people committed to peace and justice for all, but rather must reaffirm our determination to counter extremism and promote tolerance everywhere," Kerr said in a statement. "As we prepare to bring the world's leaders together at the United Nations next week, we are reminded again in tragedy of our common humanity."

Noting the death of the wife of the USAID worker, Kerry commended agency workers for their efforts around the world and said the U.S. pledged "our commitment to do whatever we can to assist in bringing the perpetrators of this abhorrent violence to justice, and to continue our efforts to improve the lives of people across the globe."