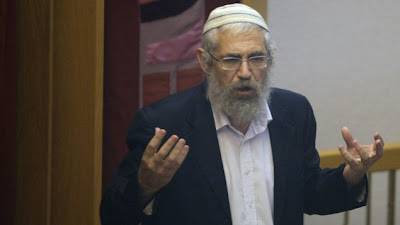 One of the two witnesses set to testify against Rabbi Motti Elon, who is on trial for sexual harassment, refused to take the stand Tuesday, forcing the prosecution to drop half of the charges against him at the final stages of the court case.


Elon was indicted on two counts of indecent and sexual assault against two 17-year-old male students between 2003 and 2005, when he was head of Yeshivat Hakotel in Jerusalem’s Old City.

The reluctant witness, who was a minor when Elon allegedly harassed him, wouldn’t face his former teacher in court, Channel 10 reported, citing both fear and heavy pressure from friends and family as the reasons for his sudden change of heart.

“It was decided not to force him to appear [in court], and, as a result, the prosecution had to retract a second charge being pressed,” the statement said.

Elon — a popular rabbi and educator — was indicted in November. Throughout the proceedings, the rabbi has maintained his innocence, claiming that he may have kissed and hugged students, but it was to console or encourage them, and was never done in a sexual manner.

Both of the alleged victims claimed that they turned to Elon during a time of personal crisis.

The first, known as “Aleph,” was not Elon’s student, but was experiencing an emotional crisis when a friend suggested he speak with rabbi. “Aleph” claimed that, on two separate occasions, Elon hugged him, had him lie down on his stomach, then kissed and caressed him. Elon claimed that he didn’t even recall meeting “Aleph.” He said that if they did meet, it is conceivable that he kissed “Aleph” as a means of consolation, but not for sexual gratification.

The second student, “Bet,” claimed that Elon placed his foot between his legs, had him sit on his knees, hugged him, patted him on the stomach and knees, and kissed him on the face.

Both “Aleph” and “Bet” said that Elon recited the ‘priestly blessing’ after his acts.

At one time, Elon was considered to be one of the most prominent of the new generation of leaders within the national religious camp. He was the head of Horev Yeshiva high school from 1987 until 2002, at which time he was named head of Yeshivat Hakotel, where he remained until 2006.   He is the son of late Supreme Court justice Menachem Elon, and brother of former MK Benjamin (Benny) Elon and of Beersheba District Court judge Yoseph Elon.
Posted by joe levin at 6:10 AM