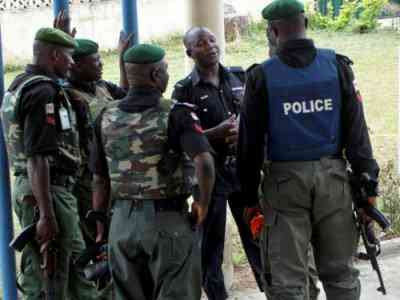 Nigeria arrested three people suspected of being members of an Iran-linked terror cell planning attacks on U.S. and Israeli interests in Lagos, the commercial capital, state security police said on Wednesday, according to a report in Bloomberg News.


AFP reported that the leader of the Shiite sect in the central city of Ilorin, named as Abdullahi Mustapha Berende, was arrested last December "for his active involvement in espionage and terrorist activities," state security service spokeswoman Marilyn Ogar said.

Investigations revealed that Berende, accused of establishing a "terrorist cell" in Nigeria's southwest, with a particular emphasis on Lagos, recruited the two other suspects for the task, Ogar said.

Berende underwent his training in Iran and his Iranian sponsors requested him "to identify and gather intelligence on public places and prominent hotels frequented by Americans and Israelis to facilitate attacks," she said.

According to Bloomberg, Ogar said the group was planning attacks on the Lagos offices of the U.S. Agency for International Development, the Haifa-based ZIM Integrated Shipping Services Ltd. and the Jewish Cultural Center.

A fourth member of the group is now at large, according to Ogar. Deborah MacLean, a spokeswoman for the U.S. Embassy in Abuja, said she had no information on the allegations when contacted by Bloomberg.

Berende allegedly gave to his Iranian handlers the names of former dictator Ibrahim Babangida, and ex-supreme leader of Muslims in Nigeria, Ibrahim Dasuki, as targets for attacks that could "unsettle the West," Ogar told AFP.

His accomplices conducted surveillance and gathered data on the targets, ahead of the attacks, alleged Ogar.

Berende denied involvement in espionage or terror-related activities but admitted seeking information about some individuals and institutions, AFP reported.

A shipment of Iranian weapons, including rockets, grenades and mortars, was seized in 2010 by Nigerian customs who said they were labeled as “packages of glass wool and pallets of stone.” Azimi Aghajani, an Iranian national, and Nigerian Aliyu Jega are facing trial for illegally shipping the weapons into the country.
Posted by joe levin at 7:09 PM