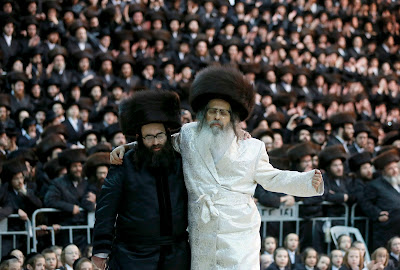 “I will pay 100 dollars a head to all those who vote for the Meretz party,” thundered Zalman Leib Teitelbaum, the grand rabbi of the Satmar Hassidim, in a rally in Jerusalem’s Shabbat Square organized over a month after the Knesset elections concluded.


Several haredi men, eagerly walking past on the way to the Jerusalem army recruitment center glanced over disinterestedly as Teitelbaum spoke, not paying him much attention.

According to Shloime LoKoreh, the Rebbe’s assistant, he had gotten confused about the date of the election due to his “debilitating myopia that caused me to misread the calendar.”

Teitelbaum, speaking Yiddish, told several pigeons perched nearby that constituted a large segment of his audience that the only way forward for Israel and the Jewish people was to vote for the Meretz party.

Meretz, he claimed, will help restore the balance in Israel where haredim constitute a disproportionate percentage in the top army units and have begun to change the IDF into a more religious organization.

“Meretz, as a party that opposes religion and state, will bring the haredim back to their yeshivas and out of the army, which is still not kosher, despite only serving food certified by the Edah Haredit,” he said.

Meretz leader Zehava Gal-On ascended the podium after the rabbi, and told the crowd of black-hatted new recruits, now on their way home from the induction center, proudly discussing what units they wished to join, that their presence in the army was not good for the State of Israel.

“We have to equalize the burden and allow more secular Jews to join Sayeret Matkal!” she shouted, referring to the General Staff’s special elite recon unit. “There are too many beards there already! Go back to your yeshivot!” As the new recruits hurried away, Gal-On told the pigeons, who were rooting around looking for crumbs on the sidewalk in front of the podium, that the longstanding phenomena of haredim taking away jobs from secular Jews also had to stop immediately.

“I implore you,” she cried, “go and study the holy Torah.