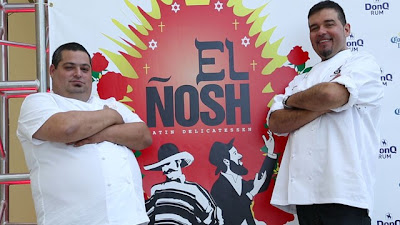 What do Latin and Jewish culture have in common besides lavish parties for teenagers and overbearing mothers? A love of food, albeit different dishes. But now chefs Eric Greenspan and Roberto Treviño are bridging the culinary divide with El Ñosh, a pop-up restaurant in Miami open during South Beach Wine & Food Festival.


On the menu: gefilte fish tacos, pastrami and dill pickle croquetas, and mole-braised brisket with sweet plantain kugel and cilantro salad. This isn't your abuela's or bubbe's cooking.

The name of the pop-up is a play on the Yiddish word for snack (nosh), only with an ñ added for Latin flair. "Cause nothing says Latino like a big ñ," says Chef Treviño, the Latin side of the equation.

Treviño is originally from California and now runs four successful restaurants in Puerto Rico. Greenspan is from L.A., and met Treviño on the set of Food Network's "Next Iron Chef." They've been collaborating on projects since then.

"Latin and Jewish food both come from peasant and working-class backgrounds," says Greenspan, chef at L.A.'s The Foundry at Melrose. "They use a lot of the same ingredients as far as proteins go but totally different vegetables and spices...what's been fun of this experience is that we've never tried this before, we didn't try any of these ideas until we got here."

Chef Greenspan and Treviño hope to expand El Ñosh to other cities in the near future.