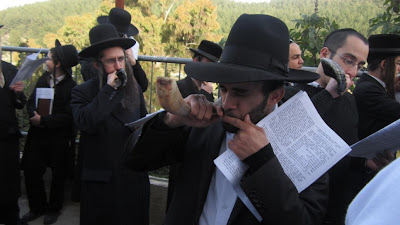 AMUKAH, Israel  — They walked up a tree-lined path through stony hills to a square, white building — men in black hats, beards and frock coats; in T-shirts and jeans; in sweaters, slacks and velvet kippahs.


They came by the hundreds — 19-year-olds looking for a match, 40-year-olds losing hope that they would ever find one, boys of 15 praying for the unmarried.

They had come for a special ceremony: They would blow 1,000 shofars, encircle the building seven times and recite penitential prayers led by a master of Jewish mysticism. They would scream and they would sing.

They had come to harness the power of a dead rabbi, Yonatan ben Uziel, a man they believed would intercede on their behalf in heaven, granting any Jew a match within the year — as long as they prayed at his tomb or paid a fee.

“This is the bringing-together of all the strengths in the world,” said Meir Levy, a 40-year-old bachelor who had come to join the prayer service on Jan. 27. “This is a very holy place.”

A man in a light blue robe, red velvet hat and paisley sash approached the building’s courtyard. Volunteers distributed standard-issue shofars to anyone they thought could blow. Cardboard boxes full of the rams’ horns emptied as the men stood at the ready, waiting for the robed man — the kabbalah master Rabbi Yechiel Abuchatzeira — to begin the prayers.

“The Abuchatzeira family is a family with many miracles,” said Eliyahu Hazan, 32, as he waited for the rabbi. “Their reputation speaks for itself. Everyone who goes to them gets results.”


Holding a microphone against his white beard, Abuchatzeira chanted, “Prayer, repentance and charity push away the harsh decree!” and waited as the hundreds of men repeated the words taken from the High Holy Days liturgy.

The scion of a family of famous Moroccan kabbalists, Abuchatzeira is the head of the Salvation in the Depths Foundation, which runs a yeshiva located in nearby Safed. The ceremony helps raise money for the yeshiva, and a man who answered the phone there recently explained the pricing structure: $36 per month for 18 months to have prayers recited at the tomb on someone’s behalf.

Some of the students there wake up daily at 4 a.m. to study Torah in Yonatan ben Uziel’s merit. Every Friday afternoon, they walk up the barely paved road through the forest to Amukah to welcome Shabbat with a service at the rabbi’s tomb. In return, they hope, he will intercede with God.

But the ceremony on this Sunday afternoon was no ordinary service. It was, in the words of a website dedicated to the event, a “rare and unique” occasion in which the kabbalah masters would perform an “extraordinary corrective measure [to open] all the seven spiritual gates that block your luck and enable you to find your soul mate and get married THIS YEAR!”

“Answer us, shield of David,” sang Abuchatzeira into the microphone, using a phrase usually reserved for the penitential prayers recited in the weeks leading up to Yom Kippur. “Answer us, He who answers at a time of mercy. Answer us, God of the chariot. Answer us, Yonatan ben Uziel.”

The men holding the shofars repeated every line, following the rabbi as he walked in a circle through the tomb. Together they chanted the 13 attributes of God’s mercy. Then, on command, they raised their shofars and blew. It was a dissonant sound, the noise of hundreds of untrained shofar blowers. Some blew in staccato, others held the final note until they lost their breath. To the side, young boys in black hats, bused in from Safed, smirked at the proceedings.

They repeated the ceremony six more times, then moved on to prayers specifically directed toward finding a match. These prayers of the “brokenhearted” asked for “a sensible match able to give birth,” for a “woman of valor, fearing God, possessing intelligence, with good values and good deeds.”

Following the recitation of the Mourner’s Kaddish, the ceremony ended.

“It’s not that you understand what’s happening, but it’s the fact that you’re participating, that you’re ready to take part and do the right thing,” said Andre Levy, an anthropologist at Ben-Gurion University and an expert on the tradition of praying at the graves of the righteous. “In this model, you’re not supposed to understand. Your participation will make everything be accepted.”


Cryptic ceremonies like these are especially appropriate at the graves of rabbis, Levy said, because the souls of the rabbis supposedly help transmit the worshipers’ requests to God.

“In Judaism and Islam, there’s no mediator between you and God,” he said. “You are totally exposed to God, which is a difficult thought, and you need a go-between. People find solutions in the character of a righteous person.”

Levy said that despite their financial gain, rabbis like Abuchatzeira generally have genuine faith in their religious acts. But for singles like Hazan, there is added reason to believe.

“I want to build a home in Israel,” Hazan said. “There’s nothing to lose.”


Times of israel
Posted by joe levin at 8:04 AM