Outrage at US Congress staffer Aharon Friedman over 'get' refusal 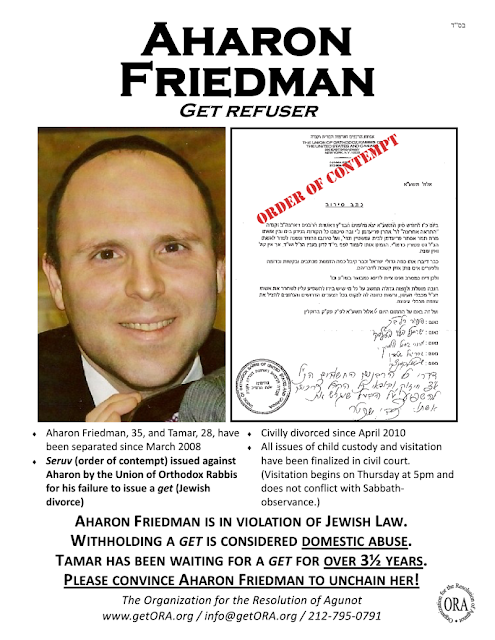 Members of Washington’s Jewish community are scheduled to protest on Thursday against congressional staffer Aharon Friedman’s ongoing refusal to grant his wife a get, a Jewish divorce document.


Friedman, an Orthodox Jew, divorced his wife Tamar Epstein in a civil court in 2010, but has thus far not granted her the Hebrew document that would give their status a Jewish legal confirmation.

From the standpoint of Halacha, or traditional Jewish jurisprudence, Epstein is currently considered an aguna, or “chained woman,” who cannot remarry.

The controversy surrounding Friedman, an adviser to Rep. Dave Camp, the Republican chairman of the House Ways and Means Committee, has become a matter for concern for the Jewish community in Washington.

Camp’s office did not immediately respond to a request for comment on the matter. Friedman has retained his position on the congressman’s staff despite pressure by Jewish religious leaders on Camp to fire him.

Thursday’s rally will not be the first to be held as part of a concerted campaign by groups such as the Organization for the Resolution of Agunot, which advocates for chained women.

“We are rallying now to continue our efforts to convince Aharon Friedman to give Tamar Epstein a get,” Rabbi Jeremy Stern, the executive director of the Organization for the Resolution of Agunot, in charge of the demonstration.


“His sadistic refusal to do so is in clear violation of Jewish Law and constitutes domestic abuse. He is an embarrassment to the Jewish community, and it is therefore incumbent upon us to stand together and state clearly that we will not tolerate this abuse in our midst.”

“[Friedman’s] recalcitrance is a form of domestic abuse,” Stern said.

The demonstration, to take place outside the Longworth House Office Building in downtown Washington, is intended “to make it clear to Aharon that we will not relent in our fight for Tamar’s freedom,” Stern declared in an email to supporters.

After asking for a divorce in 2008, Epstein took the couple’s then-two-year-old daughter and moved back in with her parents in Philadelphia. A custody battle ensued and in the final civil settlement, Friedman was granted three weekends a month to spend with his child.

However, as these weekends begin on Friday evening, Friedman, as a Shabbat observer, can only begin his visitation on Sundays.

Yisrael Belsky, a prominent New York rabbi associated with the Orthodox Union, told The New York Times in 2011 that he considered the custody arrangement “a joke,” seemingly taking Friedman’s side.

“The court decided in a bullheaded way not to respect the Shabbos,” he said at the time.

The visitation schedule was subsequently changed so that Friedman could start his visits on Thursday evenings.


However, several months later, Belsky, along with other prominent American Orthodox leaders, changed his tune, signing a document called a seruv which classified Friedman as “One who does not heed Jewish law.”

The seruv, issued by the Union of Orthodox Rabbis of the United States and Canada, declared Friedman “in contempt” of the Beit Din, or rabbinical court, and called on “any person who has the ability or opportunity to influence [Friedman] to free Tamar Epstein from the chains of her aguna status.”

Another document, issued in October 2011 by the Rabbinical Council of Greater Washington, effectively excommunicated Friedman.