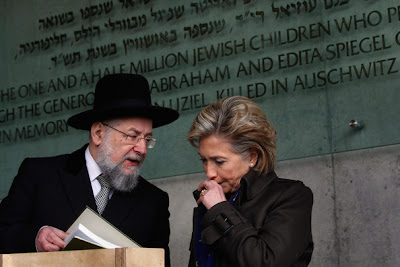 Tel Aviv Chief Rabbi Yisrael Meir Lau wrote US President Barack Obama on Friday, urging him to commute the sentence of Israeli agent Jonathan Pollard to the more than 27 years he has served.


Lau asked for Pollard’s freedom in a letter full of biblical quotations and references to former US president Abraham Lincoln, civil rights leader Martin Luther King Jr. and the Statue of Liberty. The rabbi warned of Pollard’s deteriorating health and pleaded with Obama to release the Israeli agent before he died in prison.

“Despite his admission and his regret, Jonathan continues to serve a sentence unprecedented in American history [for the crime he committed],” Lau wrote. “His health is fleeting and the remainder of his life is diminishing.”

In the letter, Lau quoted a verse in the Book of Samuel that warns that Jonathan could die. He notes that the Jonathan in the book is the son of King Saul but that it also applies to Pollard.

Lau asked Obama to permit Pollard to move to Israel and become a father.

He noted that Pollard would soon mark the unfortunate milestone of 10,000 days in prison.

“Let him live the rest of his life with his wife, Esther, in the State of Israel that granted him citizenship,” Lau wrote. “This action would be seen as a humanitarian gesture by the seekers of freedom in the world.”

Lau will have an opportunity to raise Pollard’s fate directly with Obama, because he will be with him when Obama visits Yad Vashem, of which Lau heads the board of directors, next month.