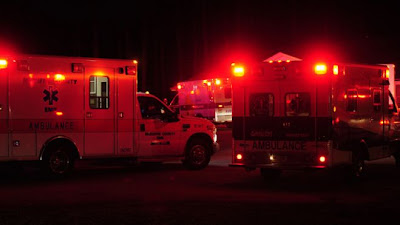 THOMSON, Ga. – Five people were killed and two injured when a small jet crashed Wednesday night off the end of a runway in eastern Georgia.


Thomson-McDuffie County Sheriff Logan Marshall said the jet crashed after 8 p.m. Wednesday. He said the two survivors were taken to area hospitals but did not have information on their conditions. He said the identities of those killed were being withheld pending notification of family members.

The Hawker Beechcraft 390/Premier I en route from Nashville, Tenn., crashed around 8:30 p.m. at the Thomson-McDuffie County Airport, about 30 miles west of Augusta, Federal Aviation Administration spokeswoman Kathleen Bergen said in an email.

Seven people were aboard, she told The Associated Press in the email. She added that she had no immediate details about a possible cause.

The Augusta Chronicle cited Assistant County Fire Chief Stephen Sewell as saying there were at least two survivors identified as a pilot and a passenger. But he provided no additional information about those aboard in that account.

The newspaper said a brush fire flared near the crash scene, quoting witnesses who reported local power outages that prompted a utility to send workers to the site. A photograph posted on the newspaper's online site showed ambulances with lights flashing.

The plane was on a flight from John Tune Airport in Nashville, Tenn., to the Thomson-McDuffie airport, Bergen said in her email, adding the aircraft is registered to a company based in Wilmington, Del.