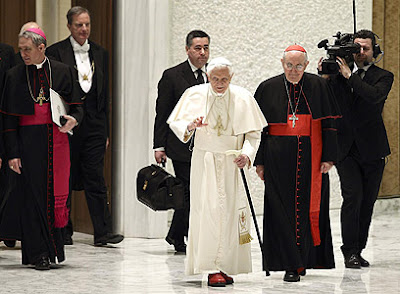 A report has linked the resignation of Pope Benedict XVI to the discovery of a network of gay prelates in the Vatican, according to Italian newspaper La Repubblica. Some of the prelates, the report said, were being blackmailed by outsiders.


The pope's spokesman declined to confirm or deny the report.

According to La Repubblica, the pope had taken the decision that he was going to resign on 17 December– the day he received a dossier compiled by three cardinals who were tasked with looking into the so-called "Vatileaks" affair.

The newspaper noted that last May Pope Benedict's butler, Paolo Gabriele, was arrested and charged with having stolen and leaked papal messages that portrayed the Vatican as a hotbed of intrigue and internal strife.

According to La Repubblica, the report, comprising "two volumes of almost 300 pages – bound in red" was transferred to a safe in the papal apartments and would be delivered to the pope's successor as soon as he is elected.


The newspaper said the cardinals described a number of factions, including one whose members were "united by sexual orientation."

La Repubblica said the report claimed some Vatican officials had been subject to "external influence" from laymen with whom they had links of a "worldly nature." The paper said this was a clear reference to blackmail.

The Italian daily quoted a source "very close to those who wrote (the cardinal's report" as saying, "Everything revolves around the non-observance of the sixth and seventh commandments."

La Repubblica said the cardinals' report identified a series of meeting places in and around Rome, including a villa outside the Italian capital, a sauna in a Rome suburb, a beauty parlor in the city's center, and a former university residence that was in use by a provincial Italian archbishop.
Posted by joe levin at 12:43 PM