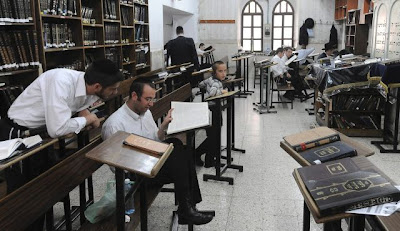 A prominent ultra-Orthodox leader has rejected proposals to draft Haredi men, dismissing even the compromise plans that were deemed too lenient by secular parties. “There can be no compromise here that will allow the study of Torah to stop among the Jewish people,” Rabbi Aharon Leib Shteinman, a prominent leader of the non-Hasidic Lithuanian sector of the Haredi community, wrote today in the Yated Ne'eman newspaper.


“Torah study is basic to our vitality and our role in life. If it is taken away from us, that will be the greatest disaster since we will not be able to do God’s will properly. Our lives depend on it.” Later in the week, Shteinman called on parents and children to hold prayer services on the Fast of Esther on Thursday “to annul the decree.”

Shteinman wrote the letter in response to attempts to win Haredi parties’ support for moderate draft proposals such as the one drawn up by Prof. Eugene Kandel and officially adopted by Prime Minister Benjamin Netanyahu. The Yesh Atid and Habayit Hayehudi parties rejected that proposal, claiming that it is too lenient and will not lead to any significant change in the system. This morning Shteinman also rejected the plan. His position is binding upon United Torah Judaism and makes it hard for Shas to adopt a different stand toward any compromise proposal.

Shteinman cited ideological and practical reasons for opposing the draft of yeshiva students. He said that it is more difficult to begin studying Torah after army service when one is already an adult. “To reach greatness in Torah, one must labor at it for many years, and those years are the most important in every young man’s life,” he wrote in the ultra-Orthodox newspaper.

Shteinman went further calling military service unthinkable by its very nature, a position he has not expressed in writing until now. “The very act of living in the army framework causes terrible spiritual danger…and this is the opposite of the way we bring up our sons.”

The Lithuanian Haredi leader also hinted that the attempts to draft ultra-Orthodox Jewish men stem from a desire to change the Haredi lifestyle rather than from national necessity. “We ask the government to leave us alone and not try to change us, and allow us to continue living in our own way. There can be no compromise on this matter lest the study of Torah cease among the Jewish people, God forbid,” he wrote.
Posted by joe levin at 8:46 AM