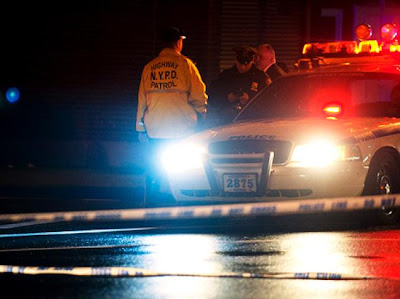 A man was struck and killed by an NYPD cruiser in an early-morning Queens crash, police said.

The accident happened at about 12:45 a.m., at the intersection of 10th Street and 40th Avenue.

The two officers inside the cruiser were responding to a 911 call and the man was trying to cross the street at the time of the accident, police said.

The vehicle remained at the scene hours after the crash, the windshield cracked as the victim’s body lay nearby.

There’s no word on the victim’s identity – or if the officers or man could have done anything to avoid the crash. The officers were not seriously injured, and police are continuing to investigate.
Posted by joe levin at 6:32 AM