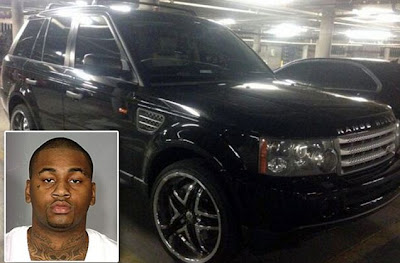 
Police are seeking Ammar Harris, 26, in the shooting and subsequent car crashes that occurred in a section of the Strip that includes Caesars Palace, Bally’s and the Bellagio.

The shooting came after the occupants of a black Range Rover and a Maserati got into an altercation in the valet area of the Aria hotel and casino, according to Clark County Sheriff Doug Gillespie.

“We have numerous witnesses to this,” Las Vegas Police Sgt. John Sheahan said. “But what is the genesis of this? We don’t know yet.”

The suspect was in the Range Rover, while 27-year-old aspiring rapper Kenny “Clutch” Cherry of Oakland, Calif., was at the wheel of the Maserati.

According to reports, the Range Rover pulled up and allegedly opened fire into the Maserati near a stoplight in the pre-dawn hours.

A passenger was injured by the gunfire and Cherry was killed, causing the car to spin out of control. The careening silver Maserati smashed into a taxicab, trapping the passenger and driver and causing the cab to burst into flames; both occupants were killed, police said.

Then, the Maserati smashed into three other cars before coming to a stop.

The taxi driver was identified as Michael Boldon, 62, of Las Vegas. His passenger was Sandra Sutton-Wasmund, 48, of Maple Valley, Wash. She was a two-time breast cancer survivor. Both died of "multiple blunt force injuries," the coroner's office said.

All three deaths were classified as homicide.

Police released a photo that was taken when Harris was arrested last year on pandering, kidnapping, sexual assault and coercion charges, according to The Associated Press.

KSNV reported that police did not find Harris at his residence Saturday, but the black Range Rover was found just a few blocks away from the intersection where the violent incident occurred.

Police also said they found shell casings in Harris's apartment that linked him to Cherry's death.
Posted by joe levin at 10:27 AM