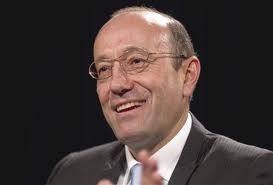 Call it the battle of the Jewish Al Jazeeras.

Earlier this year Jewish billionaire Alexander Machkevitch of Kazakhstan announced plans to open a 24- hour international news channel with a Jewish twist that would compete with Al Jazeera, the popular Arab media outlet based in Qatar.

But he may have been beaten to it.

“Some Jews came up with the idea of how to change the world and they wanted to compete with other news channels, including one in particular,” Zanzer said over the phone from Belgium. “I won’t say which one but it starts with ‘al’ and ends with ‘ra,’” referring to the Qatari-based channel.

The nascent Jewish news organization is jointly owned by Jewish businessmen Igor Kolomoisky and Vadim Rabinovich, two of the richest men in Ukraine.

Zanzer said it has a budget of five million dollars, studios in Brussels, Kiev and Tel Aviv, and is available on satellite frequency Astra 1G – 31.5°E.

“We’ll broadcast everything that might interest Jewish people in the world, whether it’s the fall of the euro or what’s happening in Israel,” he said.

Machkevitch, a mining mogul who has dual Israeli- Kazakhstani citizenship, was the head of the Euro-Asian Jewish Congress for almost a decade before stepping down earlier this year, while Kolomoisky and Rabinovich, who made their money in oil and gas, are the president and vice president of the European Jewish Union, respectively.

News that the Ukrainian pair were planning to launch a Jewish news station took many by surprise. The first reports about Jewish News 1 appeared in Israeli newspapers earlier this week and its producers said it went live yesterday.

The Brussels bureau chief said Jewish News 1 was first conceived several months ago and was one and the same as the 24-hour television channel that Machkevitch had spoken about.

“Yes, they are related,” he said. “In fact, it is the same project.” But Zeev Feiner, a project manager working for Machkevitch, and Jewish News 1 general producer Dickenson, both said the two were unrelated.

Feiner told The Jerusalem Post that Machkevitch’s news channel has changed direction since it was first announced at a Keren Hayesod conference in Washington DC last winter with the aim of “representing Israel on an international level with real information,” according to Machkevich.

“We are not working on a Jewish channel for the Jewish people, but an international news network that will compete with the major new networks like BBC, CNN and Al Jazeera,” said Feiner.

Feiner said the as-of-yet unnamed 24-hour news channel would not compete for the same audience as Jewish News 1.

“I welcome and wish success to the new channel,” he said.
Posted by joe levin at 10:30 AM