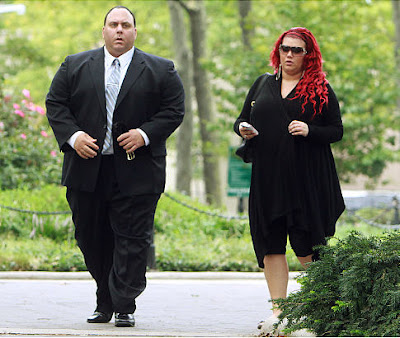 A 370-pound Staten Island mobster claimed Wednesday it's hard for him to stay out of trouble because there are so many gangsters in the borough - and a federal judge agreed.

Frank (Frankie Steel) Pontillo said his bust for hanging with known mafiosi at a bar called On The Rocks was the cost of doing business in the city's least-populous outpost.

"I didn't invite the Five Families to gather at the opening of a bar," said Pontillo, who runs the grill there. "Staten Island is very small. There's lots of felons on the island.

"Every time I go somewhere, I see someone from my past," said Pontillo, the son of a jailed mobster.

Pontillo, 41, sweating nervously in a blue suit, also told Brooklyn Federal Judge I. Leo Glasser that dodging made men in the borough of 477,000 was harder than ignoring the Staten Island ferry.

Glasser - who had twice previously sentenced Pontillo - showed some sympathy for the Colombo family associate.

"That's a problem with people who grew up in Bensonhurst or Staten Island, spent a good part of their life in prison," Glasser said.

"People they've known actually their whole adult life [are] convicted felons and members of one organized crime family or another."

The hulking gangster was sentenced to six months of house arrest and two years' probation.

Pontillo, accompanied by his red-haired fiancée at his sentencing, plans to get married and continue his new career as a plumber's assistant.

Despite his protestations about the prevalence of gangsters on Staten Island, Pontillo drove to New Jersey to commit his latest crime: buying stolen TVs in an FBI sting.

He was arrested in 1991 during the bloody Colombo family war for a plot to murder members of a rival faction by disguising himself as a Hasidic Jew.

Pontillo will do the time in his Staten Island house, where he's presumably safe from mob associates in the land of slain Gambino family boss Paul (Big Paul) Castellano and mob turncoat Salvatore (Sammy Bull) Gravano.

The mobster was arrested there last January by an FBI team that tossed concussion grenades inside. Pontillo complained the arrest traumatized his 4-pound Maltese puppy, Logan.

Asked how the dog was doing these days, Pontillo replied, "Good."

Pontillo might need protection from his outer borough neighbors, who were incensed by the gangster's description of Staten Island.

"It's disgraceful, it really is," said Maria Catalano, 49, of Willowbrook. "I don't agree with that, not at all. First of all, that guy should be in jail."

Staten Islander Michele Como was irate over the judge's comments.

"I think he's very narrow-minded," Como said of the veteran jurist. "I'd like to know where he got his information. It's infuriating. Shame on him!"
Posted by joe levin at 10:20 AM