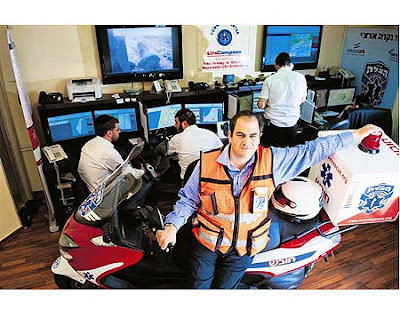 The United Hatzalah of Israel rescue organization is stepping up is competition against Magen David Adom with a 24/7 emergency center, which will operate on Shabbat and Jewish holidays as well.

MDA and United Hatzalah have been in a growing competition in recent years. Now, in an attempt to boost its status as a rescue service, United Hatzalah has decided to set up an emergency call center which will compete against MDA's 101 center and provide first aid for free.

The organization's managers turned to the rabbis guiding them and asked for the help in dealing with the halachic challenge hidden in this move. The rabbis responded that the emergency center could be operated by a non-Jewish worker on Shabbat for life-saving purposes.

United Hatzalah Director Eli Beer explained that "a non-Jewish person will sit at the emergency center, which can be reached by dialing 1221, and each call he receives will be directed through the communication system to the group of volunteers in the relevant area.

"Our goal is to make it possible for every person to call us, even in cases of light injuries, free of charge and at maximum speed."

In serious cases, the person operating the emergency center will be instructed to call an MDA ambulance as well.

A senior MDA official said in response, "What comes easily will disappear as easily. It's a shame that United Hatzalah is throwing dust in the public's eyes.

"I should hope that those who feel responsible for their families will not gamble at the last minute on a service based on an attempt to imitate a professional body which has existed for the past 80 years."

United Hatzalah declined comment.
Posted by joe levin at 6:01 AM