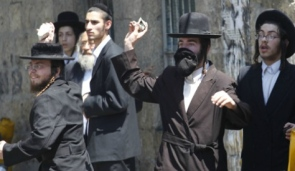 A bookshop in a strict ultra-Orthodox neighbourhood of Jerusalem has come under attack from religious zealots whose "mafia-like" intimidation tactics have created a climate of fear and resentment among members of the area's business community.

The shop, known as Or Hachaim/Manny's, has had its windows broken twice, its locks glued shut and has been pelted with fish oil by members of the fringe Sikrikim group, an extremist breakaway faction from the ultra-Orthodox Neturei Karta movement, which opposes the modern state of Israel because it was established by man and not God.

Since the shop opened in the neighbourhood of Mea She'arim in March 2010, the Sikrikim have been calling for a boycott in an effort to force its managers to remove all English-language and Zionist books, said Marlene Samuels, one of the shop's managers. They have also demanded the shop shut down its English-language website and erect a sign requesting that customers dress modestly.

"They're not happy with the large number of tourists that come in here because they feel they're not dressed modestly enough," she explained, pointing out that Israel's English-speaking community and visitors from the US, the UK and other European countries constitute a large proportion of the shop's clientele.

David Rotenberg, head of Or Hachaim's English department, said the Sikrikim had also dumped bags of human excrement beside the religious books on display inside the store – "the bottom line on how disgustingly crazy these people are".

Established in the 1870s by ultra-Orthodox Jews of eastern European origin, Mea She'arim's residents have retained the conservative customs and dress of the old eastern European ghettos. Life in the insular, densely populated neighbourhood is strictly governed by Jewish law and its patchwork of religious sub-groupings and factions generally resent state interference in their affairs.

According to Samuels, while the Sikrikim have no religious legitimacy in the eyes of Mea She'arim's ultra-Orthodox community – and reportedly comprise just 60 to 100 members – their reach and impact are widespread.

"Everybody suffers from them; this has been going on with other stores for years," she said. "If people do not toe the line according to their very extreme, anti-Zionist philosophy, they become very aggressive."

Several shop owners in the neighbourhood told the Guardian they had been harassed by the Sikrikim, but requested anonymity and would not allow their businesses to be named.

An employee at a CD and DVD store that opened in Mea She'arim three years ago told how the Sikrikim had held protests outside the shop, blocked customers from coming in, thrown rocks at him and broken the store owner's car windows because they consider the CD and DVD formats too modern.

Samuels claimed the police had not done enough to arrest the window-smashers, despite Or Hachaim having lodged four complaints and provided CCTV footage identifying the culprits.

"The police don't want to get involved, they're scared of this group. It's almost like the mafia," she said, adding that the owners of a nearby ice-cream parlour were considering hiring a private security firm to patrol the area, having had fish oil thrown at their windows despite complying with the Sikrikim's demands and establishing separate entrances for men and women.

Police spokesman Micky Rosenfeld said Jerusalem police had received only two official complaints in connection to the shop, and an investigation had been opened which was working on "an operational as well as an intelligence level".

Samuels said complying with the group's demands could open the door to greater Sikrikim interference in her shop.

"There's protection money involved. We would have to pay them and they would send someone in regularly who would have free rein to remove whatever books he didn't like."

Rabbi Shlomo Melech, a lawyer and former member of the Jerusalem municipal council, said: "The Sikrikim are a very small, very extremist group, and they practice violence, which is against Judaism."
Posted by joe levin at 3:24 PM

Email ThisBlogThis!Share to TwitterShare to FacebookShare to Pinterest
Labels: Luke Browne • The Guardian