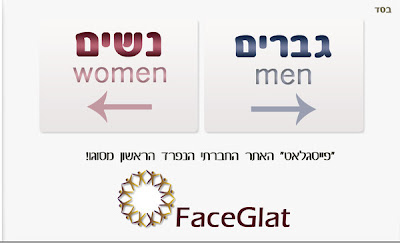 Dividing web browsing by sex to conform with Orthodox Jewish observance, FaceGlat was launched earlier in September by Yaakov Swisa, a 25-year-old Israeli interested in breaching the digital divide.

The site, as described by Worldcrunch.com, includes common Facebook features such as friending, posting photos and commenting, while infusing Orthodox traditions—sexes are separate, indecent photos are banned and coarse language is monitored.

Formed by combining the term for "highly kosher" (glat) with the iconic Facebook "Face," the website is offered in English and Hebrew. Only 2,000 users subscribe worldwide, but Swisa told Worldcrunch hundreds join weekly.

Based at Congregation Beth Hamedrosh in Wynnewood, Lower Merion Township, Rabbi Yonah Gross recently asked his eighth-grade students about FaceGlat. Though they heard of it, few, if any, had accounts.

I understand what they're trying to do, but the Orthodox spectrum is so wide. Where do you draw the line—what's a good idea, what's a bad idea?" he asked, noting that viewing accounts for his wife, aunt, granddaughter and other family members isn't problematic.

To me, FaceGlat is a business endeavor. It's not a nonprofit. It's not (affiliated) with a rabbinical organization," he said.

In general, Gurevitz understood the justification. "Look, some people (might be more comfortable) in a environment with less issues of sexual tension."

However, he said it's not for him.

For Orthodox Jews, Gross said the Internet in general is something many rabbis are grappling with. While some advise congregants to avoid it, Gross takes a different approach.

In some ways, to say that you can't use the Interest is to say you can't live a modern lifestyle," he said, adding many people at Beth Hamedrosh email, others are active on LinkedIn and some use Facebook itself.

I try to say that the Internet is more about how to use it well in order to live your life well," he said.

FaceGlat's future is still largely up-in-the-air. "If someone doesn't use the Internet, I'm curious to see how this will (impact them)," Gross said.
Posted by joe levin at 9:05 AM

Email ThisBlogThis!Share to TwitterShare to FacebookShare to Pinterest
Labels: By Sam Fran Scavuzzo