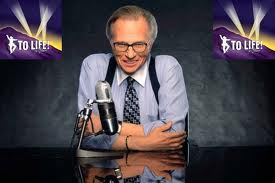 The special 30th-anniversary Chabad “To Life” Telethon aired live from Hollywood, Calif., this weekend, bringing together host Larry King and dozens of other celebrities and performers in support of Chabad-Lubavitch of the West Coast’s numerous educational and nonsectarian social service programs.

The three-hour-show – it began at 8:00 local time Sunday night – featured live performances and a series of special interviews and flashbacks from the event’s three decades of broadcasts.

“I think it will be the best year so far,” Chaim Marcus, the show’s producer, said before the broadcast.
Posted by joe levin at 10:08 AM