Rabbi Who Held Talks with Iranians Shares His Story 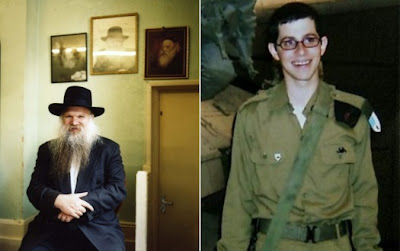 London Rabbi Herschel Gluck, a follower of the Chabad Hassidic sect, does not hide his association with Iran. According to the rabbi, it is the warm relations he has with influential officials in the Islamic republic that enabled him to try and enlist Iran to aid in the release of captive soldier Gilad Shalit.

Not everything that happens is like what you read about,” the rabbi told Ynet. “But we did have many talks about this delicate matter.”

A cable sent from the US embassy in London to the State Department in 2009 and recently published by WikiLeaks suggests that Rabbi Gluck met with an Iranian representative at Israel's request and discussed the fate of the Israeli missing soldiers.

I have known him for years and speak to him on a regular basis,” Gluck noted, speaking from his London home. “I was asked to discuss serious issues with him, we spoke about the Shalit matter a number of times and he expressed his willingness to help.

Gluck, who is the chairman and co-founder of the Muslim-Jewish Forum, refused to reveal where the meeting between him and the ayatollah took place and whether he had visited Iran.

Gluck said that he managed to create and maintain contacts in the country as his global activities have often touched upon a number of hostile countries. ”You meet with one, and then one more and it adds up,“ he said, adding ”I'm in contact with a number of senior public figures and regular people in Iran and in other places.“

Gluck also made it clear that he did not fear for his safety when he decided to approach the Iranians over Gilad Shalit: ”We live, and we do what we must do.“

In response to a query from Rabbi Gluck about Shalit, Ayatollah Safavi was reported to have ”reacted furiously, referencing numerous recent Palestinian deaths in Gaza and saying 'there can be no agreement after Gaza'“.

The rabbi noted the outburst ”was the most negative he had ever seen Safavi in their multi-year relationship, but that this may well be posturing for negotiating purposes“.

Yet Gluck claimed that the report did not necessarily reflect on the spirit in which the statements were made: ”The meeting on this delicate matter occurred during Operation Cast Lead, so things weren't simple.

Nonetheless, Gluck stressed that in most conversations that pertain to Israel, “the Iranians were respectful and acted with great delicacy.” Even the above mentioned meeting ended on a positive note, Gluck noted. “I hope that God willing, they will help in some way, but the bottom line and the most pertinent fact is that he (Gilad) is not home yet and that is painful,” the rabbi admitted.

Gluck explained that it would be a mistake to present the whole of the Iranian public as extreme in its beliefs about Israel: “On the streets of Cairo there is much more hate towards Israel than on the streets of Tehran.”

Yet in spite of the empathy, Gluck warned that the problems with Iran were serious, existential problems. Iran is a great danger to Israel and we must be watchful of that.

Let there be no doubt, they are involved in nuclear weapons, but the opposition there is also united in their belief that Iran needs to be producing a nuclear weapon, and the project continues to grow.

They are no fools. It is difficult to say whether the Iranians will be capable of directing hteir nuclear weapons towards Israel, but the possibility of that even happening should be enough for us to be wakeful of the growing problem."
Posted by joe levin at 8:26 PM