Make no mistake, Israel's existence is under threat

An ultra-orthodox Jewish man prays at the Western Wall 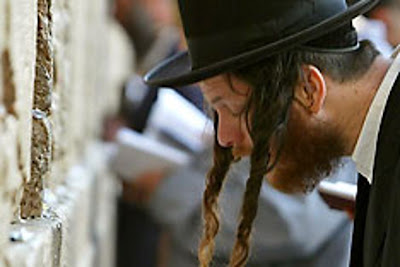 Let's imagine for a moment that at this time next year, by some miracle, Benjamin Netanyahu and Mahmoud Abbas meet on the White House lawn to sign the accord that will create the nation of Palestine. All disagreements are forever resolved - from where the borders of the two countries will lie, to how they will share Jerusalem as their capital.

Let's also assume that all Muslim and Arab nations will keep their promise to recognise Israel – and that the militants of Hamas, Hezbollah, and Islamic Jihad are consigned to the dustbin of history.

If you think Israelis and Palestinians don't see eye to eye, the gulf between secular Israelis and the ultra-orthodox religious is probably just as wide.

Go to Tel Aviv on a Saturday morning, and you'll see one version of Israel – secular, middle-class sun-worshippers, sitting in trendy beachside cafes, munching on bacon and eggs, or hummus and salad.

Then, on the same Saturday morning, drive 40 minutes up the highway to Jerusalem, where you'll visit an entirely different country. Here, there are no cars, and streets are closed off with police barriers – as ultra-orthodox Jews in black overcoats and fur hats walk to the Western Wall to pray.

And no, the two groups don't get along.

Secular Israelis are prepared to die for their country in battle, but have to travel outside it to get married in a civil ceremony.

Not surprisingly, it's a pretty sore point. Especially as the demographic balance is shifting fast.

Secular couples have, on average, around two children per couple. Haredi couples have closer to eight or nine.

And it's changing the very identity of Israel – away from the secular, socialist civil society it was created as in 1948 – to something quite different.

To see it in action, you only need to take a peek inside an Israeli school.

Back in 1960, only around 15 per cent of Israeli children were enrolled in religious or Arab schools.

That figure is now around 50 per cent. In 30 years, it will be almost 80 per cent. That is a frightening statistic for the nation of Israel.

But the real problem is in the religious stream.

In religious schools, children don't learn mathematics, science, or English; only the Bible. All day, every day. And Haredi men are expected to - and do - continue that Bible study for the rest of their lives.

What does it mean? Well, if the figures are to be believed, in less than 30 years, Israel will have a population where the majority either can't, or won't join the workforce – putting an increasing, and impossible burden on the secular minority to pay the taxes and serve in the army.

This, in the 'Startup Nation' - the country that prides itself on its hi-tech sector. Israel has the ideas, the inventors, and the entrepreneurs - but already, it has to import workers from overseas, because there aren't enough educated Israelis in the job market.

It's not sustainable. Israelis know about it, and sometimes talk about it, but Israel's government does nothing. It's just too hard – especially as the political power of the ultra-religious is growing. It's almost impossible to form a government in Israel today without them.

Opposition - and resentment - is growing. Middle-class, taxpaying, secular Israelis are already so angry about the mere cost of living – and that their children cannot afford to buy or rent a home – that they have taken to the streets in huge numbers.

But it's hard to see how any government – however brave – is going to be able to turn the ship around without committing political suicide.

Now let's imagine that in a year from now, Benjamin Netanyahu and Mahmoud Abbas have not reached a peace deal.

All of the current problems are still there; but Israel is even more isolated, the Palestinians are even more frustrated, and sitting in the midst of an ever more unstable and chaotic region.

This week's UN assembly might have put Israel and Palestine back in the headlines - but it won't solve the conflict. And soon enough, it will all fade from view again.

And all the while, behind the scenes, Israel's demographic time bomb is still ticking away.
Posted by joe levin at 6:00 AM

Email ThisBlogThis!Share to TwitterShare to FacebookShare to Pinterest
Labels: By ABC's Ben Knight