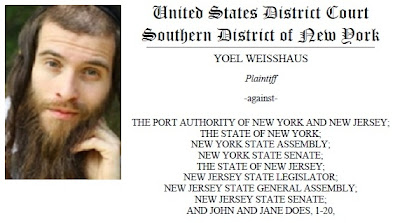 Yoel Weisshaus of New Milford claims the increase is an abuse of power and discriminates against him because he is poor.

Weisshaus claims the tolls are targeted to restrict minimum-wage earners and will be used to complete the World Trade Center project instead of improving bridges and tunnels.

The Record newspaper reports the unemployed Bergen Community College student, who frequently visits his grandparents in Brooklyn, has asked the court to waive filing fees because he can’t afford them. He is representing himself.
Posted by joe levin at 12:10 PM