Riot police detain a demonstrator during a rally of protest against pilgrimage of Hassidic Jews in the town of Uman, 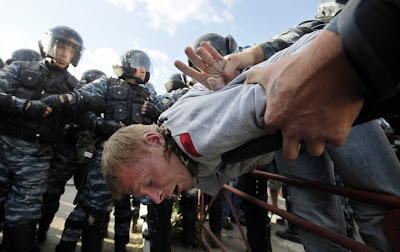 Tens of thousands of Hasidic Jews plan to visit the grave of a prominent Jewish cleric, Rabbi Nachman of Bratslav, in Uman.

KIEV - Ukrainian police detained dozens of people on Sunday who were protesting what they called an uncontrolled influx of Jewish pilgrims to the town of Uman, police and the Ukrainian nationalist party Svoboda said.

The protest, attended by about 100 people, took place days before the 70th anniversary of the Babi Yar massacre, the mass killing of Jews by the Nazis after the occupation of Kiev in 1941.

Uman, a town of 90,000 in central Ukraine, is the site of an annual pilgrimage by tens of thousands of Hasidic Jews who visit the grave of a prominent Jewish cleric, Rabbi Nachman of Bratslav.

Svoboda held the protest in Uman to demand stricter legal and sanitary controls on pilgrims. Party activists say the pilgrim influx must be better regulated and presents a security and health risk.

We are not anti-Semites, we do not have anything against Jews," Tetyana Chornomaz, the head of the regional Svoboda unit, told Reuters by telephone from Uman. "[But] we have many questions regarding [the pilgrims'] stay in Ukraine."

Chornomaz said riot police detained about 20 people following brief scuffles after the rally, but it was not clear if they would face any charges.

Interfax news agency quoted the Ukranian Interior Ministry as saying that police had detained about 60 people.
Posted by joe levin at 5:22 AM