Rabbi Zalman Paris and his wife, Chana, of Chabad of TriBeCa, which has asked for a permit for a sukkah in a small park 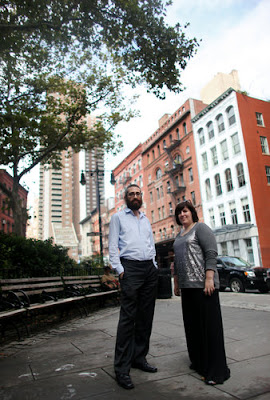 Ralph Musolino unreeled his Stanley tape measure across the walkway of a small park in TriBeCa, marking off space for the construction of a Jewish ritual hut known as a sukkah, while Rabbi Zalman Paris, in auburn beard and tzitzit fringes, crouched nearby holding the tape’s other end.

If the sukkah goes out onto the sidewalk, that’s a whole other issue,” Mr. Musolino cautioned the rabbi, as he chalked off where on the walkway he could squeeze the hut’s roughly 12-by-14-foot footprint. “But I want to make sure you don’t have a telephone-booth-sized sukkah.”

Though not Jewish, Mr. Musolino, the Lower Manhattan district manager for the New York City Department of Parks and Recreation, has learned quite a bit about the often obscure structure known as a sukkah because the agency has allowed the huts to be erected in several parks, including two in Mr. Musolino’s jurisdiction, Battery Park and Bowling Green.

But the one being contemplated for TriBeCa’s Duane Park, which is more of a triangular traffic island, has presented a different challenge. Some members of the local community board, as well as advocates for the park, oppose the erection of a sukkah, saying it violates the First Amendment’s prohibition against establishment of religion or, at the very least, is an intrusion in a tiny park.

When Rabbi Paris’s organization, Chabad of TriBeCa, asked for a permit to put up the sukkah, three members of the board’s 11-member TriBeCa committee either voted against it or abstained, leaving the permit in limbo.

“I don’t want to encourage having all sorts of religious things in our public parks,” one committee member, Paul Cantor, told a community newspaper after voting against the application. Mr. Cantor did not respond to messages left on his voice mail.

The entire board, Community Board 1, is scheduled to vote on the permit on Tuesday. Scott M. Stringer, the Manhattan borough president, has urged the board to support the sukkah. Julie Menin, the board’s chairwoman, would not say how she would vote but said, “our community has been known as a very tolerant community.”

The board played a role in the controversy over the creation of an Islamic center near ground zero when it approved a request to drop the landmark status of the building envisioned for the center.

“It’s very important that no religion get preference, but every single religion needs to get fair and equal treatment,” Ms. Menin said.

Controversies about religious displays in public spaces are as common before Christmas as holly wreaths. The public sukkah, though, is an autumnal phenomenon — this year the eight-day Sukkot harvest holiday begins at sundown Oct. 12 — and has its own constitutional complications.

Sukkahs are fragile shacks with branches or reeds as roofing, which Jews put up because of the biblical injunction to remember the transitory shelters the ancient Israelites used while wandering in the desert. They are usually erected on synagogue grounds or rooftops or private balconies or backyards.

But a request for a display in a public space raises difficult questions.

Is the sukkah merely a cultural symbol, or is it unmistakably religious in character? Does the government endorse its religious significance by allowing it to occupy a big chunk of a park when symbols of other faiths are not represented?

Despite several Supreme Court rulings, religious displays — whether of crèches, crosses, menorahs or the Ten Commandments — remain a subject of great ambiguity, civil liberties lawyers say. Individual municipalities must often decide the matter for themselves, relying on guidelines that the courts have clarified.

Arthur Eisenberg, legal director of the New York Civil Liberties Union, said one widely accepted principle is equality: The government cannot discriminate against groups that seek access to the park, cannot “favor some religions over others” and “cannot privilege nonreligious expression over religious expression.”

Nathan Lewin, a lawyer who has successfully represented Chabad in menorah cases, said government can accommodate religious displays but cannot appear to endorse them, an impression that might be created by a nativity scene stationed inside a government building with no other religious symbols nearby.

The parks department said it allowed sukkahs as long as “the applicant ensures that they are structurally safe.”

“We’re content-neutral when evaluating applications for events in parks, whether they be of a religious, political or cultural nature,” Vickie Karp, a spokeswoman for the department, said.

Nevertheless, the city has at times indicated that more blatant religious images might stir questions. The Department of Transportation removed a crèche last Christmas from the St. George Ferry Terminal in Staten Island, drawing protests from some priests and ministers. A department spokesman said the crèche had been removed because a staff member had put it up without authorization, but he also said that menorahs and Christmas trees were “consistent both with traditions at the ferry terminal and also with legal precedent.” Supporters of a crèche said the suggestion was that trees and menorahs were seasonal images and not as blatantly religious as a figure of the baby Jesus.

Rabbi Paris, 36, director of Chabad of TriBeCa, and his wife, Chana, seem not to have had these issues in mind. He said the impetus for putting up the sukkah came from Jews in TriBeCa who wanted a convenient way to observe the custom of sitting and eating in a sukkah. TriBeCa, he said, offered few options because outdoor parking lots and large backyards were scarce.

Rabbi Paris took pains to say he was mindful of the neighborhood’s sensitivities.

We respect anyone in our community who might object to a sukkah in a public space,” he said, “and are actively searching everywhere for appropriate and accessible space.”
Posted by joe levin at 5:56 AM