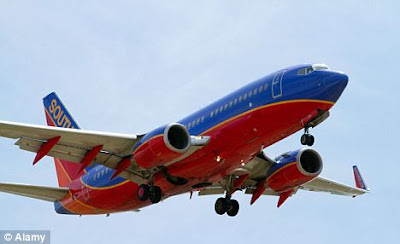 Bizarre symbols written in 'invisible paint' on the undercarriage of several Southwest Airline's planes is being investigated by the FBI.

The writing - which only shows up with heat - appears to be Arabic script.

The special chemical paint appears towards the back of the 737 aircraft, but only after an auxiliary power unit on the plane is turned on, warming the underbelly, engines and landing gear.

Most of the affected planes appear to be flying out of Los Angeles.

In a statement to KNX 1070 radio, Southwest said it is working with authorities to uncover who was behind the 'vandalism', but added that currently it is not clear how many people are involved.

Southwest also said the writings did not imply any safety issues.
Despite an FBI investigation into the writings, the trend has increased in recent weeks.

The writing began to appear in February.

Several theories have been put forward as to the origin of the writing, including vandalism by an employee.

Charles Feldman, who broke the story after being tipped off by a source, said: 'It does raise disturbing questions about the security because anybody who has the ability to write on an airplane and can get that close to do it, also has the ability to do other things to that aircraft.'