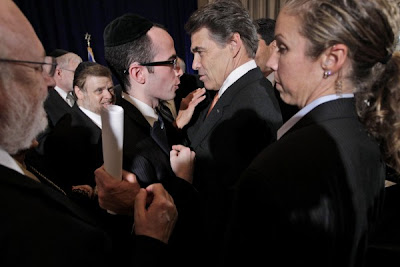 Texas Gov. Rick Perry, speaking Tuesday in New York as the United Nations General Assembly was convening, launched a broadside against President Obama, asserting that his "naive, arrogant, misguided and dangerous" foreign policy had brought Israel and the Palestinians to a crisis over Palestinian statehood.

In one of the most strongly worded foreign policy speeches of the 2012 Republican nomination race so far, Perry said the Obama administration had appeased "the Arab Street at the expense of our own national security interests" and had fumbled an opportunity to overthrow the regime in Iran. He accused the president of "isolating and undermining Israel" at every turn.

He called for the United States to "reconsider" the $4 billion in assistance the country has provided the Palestinians over the last 17 years. He said the US should close the Palestinian Liberation Organization's office in Washington if the UN General Assembly votes this week to recognize a Palestinian state.

"It is time to change our policy of appeasement toward the Palestinians to strengthen our ties to the nation of Israel, and in the process establish a robust American position in the Middle East characterized by a new firmness and a new resolve," he said.

The speech comes at a delicate moment, as Obama tries to maneuver the UN away from a declaration of recognition for a Palestinian state and nudge Israel and the Palestinian Authority back to the negotiating table. The Obama administration has found itself beset by criticism from the right that it has been too hard on Israel, and from the world that it has not been hard enough.

As if to underscore that point, Perry took the stage with New York City's newly elected Republican congressman, Bob Turner, by his side. Turner's surprise victory in a special House election last week -- in a heavily Jewish and Democratic district -- was thought to be fueled in part by Jewish voters unhappy with the president's Israel policy.

In addition to Perry, other GOP presidential candidates used the opening of the UN meeting to criticize Obama.

"What we are watching unfold at the United Nations is an unmitigated diplomatic disaster," said former Massachusetts Gov. Mitt Romney on Tuesday. "It is the culmination of President Obama's repeated efforts over three years to throw Israel under the bus and undermine its negotiating position. That policy must stop now."

"The president must not continue to lead from behind on key issues of national and international security," Minnesota Rep. Michele Bachmann also declared Tuesday.
Posted by joe levin at 3:16 PM