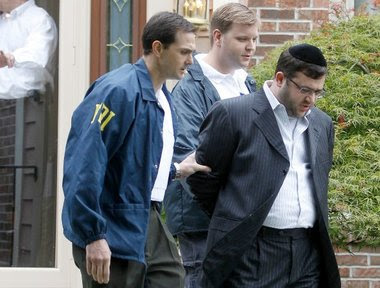 LAKEWOOD — After extended closed-door discussions in judge’s chambers, lawyers emerged this morning in federal court to say that U.S. Magistrate Judge Cathy Waldor had adjourned a bail-revocation hearing for Eliyahu “Eli” Weinstein, a Lakewood man accused of masterminding a $200 million global investment fraud, so that she can hear from witnesses before deciding the hotly contested issue.

The new hearing, where witnesses and evidence will be presented, is set for Oct. 6, lawyers said.

“It’s her discretion on how she wants to proceed, she asked for witnesses,” said Assistant U.S. Attorney Gurbir S. Grewal, shortly after coming out of chambers.

Meanwhile, Weinstein 's attorney Henry Klingeman, said outside of court, “It’s certainly unusual to have evidence contested during a bail hearing,” before adding that his client “100 percent” denies that he has violated any of his current bail conditions, as prosecutors allege.

Weinstein, a 36-year-old former used car salesman, is currently out on $10 million bail and is confined to his home, where he is tracked by a global positioning system device while he awaits a possible trial. In August 2010, he was charged with wire and bank fraud for an alleged five-year scheme that stretched from New Jersey, to Florida and California and overseas to Israel. Authorities say he preyed on members of his own tight-knit Orthodox Jewish community, moving from one victim to another as he went after friends and relatives by soliciting investments for properties he either never owned or had already sold.

He was held in custody for the first couple of weeks after his arrest, but by late August 2010 he was allowed into monitored home confinement by U.S. District Judge Mark Falk. At the time, Judge Falk noted that Weinstein's bail package was similar to those of former investment giant Bernard L. Madoff and Solomon Dwek, who was charged with a $50 million bank fraud before becoming the informant behind 2009's massive FBI-led corruption and money laundering sting.

But despite the home-confinement strictures put in place, prosecutors are now arguing that Weinstein must be sent to prison immediately. They say he’s a prolific fraudster who has continued to commit crimes and fool investors even while out on bail, lying to his pretrial services monitors and perpetrating his ongoing Ponzi scheme.

For instance, prosecutors allege that in one recent fraud, Weinstein tricked a past victim of his -- a Staten Island-based accountant referred to in government papers as “M.R.” -- into wiring him $101,700 in February. According to court papers filed on September 20 by Grewal, Weinstein fooled M.R. into believing his money would be used to make him a substitute beneficiary of a life insurance policy held by a woman who was terminally ill, so that, after the woman died, he could receive up to $5 million.

Weinstein used phony paperwork to trick M.R., prosecutors allege, and he fooled pretrial services officers into allowing him to travel to New York, where met with M.R., by telling them he was going to meet with his attorneys.

In their September 20 papers, prosecutors allege that,in all, Weinstein has been in contact with, or met with, at least five other victim/witnesses in the case. Prosecutor detail other incidents of alleged fraud, in addition to the M.R. life insurance allegations, and say what they detailed are "just examples," before adding that they will be be able to present additional examples in court.

Grewal also says that, in the next several weeks, the government "anticipates" seeking an indictment against Weinstein. To date, Weinstein, who has maintained his innocence, has not been indicted.

But in papers filed yesterday with Judge Waldor, attorney Klingeman derides the government's Sept. 20 allegations as "hastily assembled and ill-considered." In addition, he argues that Weinstein has, in fact, been "compliant with the very restrictive bail conditions imposed over a year ago," and given Weinstein's compliance, Klingeman asks Judge Waldor to "consider relaxing the conditions to allow Mr. Weinstein to assist in trial preparation."

Among other points, Klingeman argues in the court papers that M.R. is not a prior victim of Weinstein's, and that Weinstein "scrupulously followed the bail condition by having three different attorneys represent him in discussions, negotiations, and transactions with M.R." The attorney also says that M.R. was repaid in $162,000 July 2011 -- which Klingeman says is the full amount, based on more than one transaction, that M.R. had paid to Weinstein "in his dealings earlier this year with Mr. Weinstein and others."

Near the end of his papers, Klingeman also says of his client: "His ties to New Jersey, in particular the Orthodox community in Lakewood, are deep and strong, and his wife and six children make their home there. Mr Weinstein has been compliant with a very restrictive bail ... and there is every reason to believe he will continue to comply."

Documents obtained by The Star-Ledger in 2010 show Weinstein's transactions with the Orthodox Jewish community led him into a real estate deal with Solomon Dwek, the accused swindler and government informant behind the federal sting that led to the arrests of more than 40 politicians and religious figures in 2009. His creditors have included Miami real estate tycoon Harvey Wolinetz, who filed a lawsuit in 2009 claiming Weinstein bilked him of $80 million through property deals in New Jersey, Florida, New York, Tennessee, Georgia and Pennsylvania.

"Mr. Wolinetz is a lender of mine. He's made $50 million in interest. There is no basis for any fraud at all," Weinstein told The Star-Ledger in an interview in 2010 , calling himself a victim of a real estate downturn who was now trying to "rebuild my empire to what it was."

Weinstein has been the subject of millions of dollars in court judgments, including a $34 million award filed against him in 2010 in Pennsylvania.
Posted by joe levin at 8:07 PM