Modesty supervision in the darkness 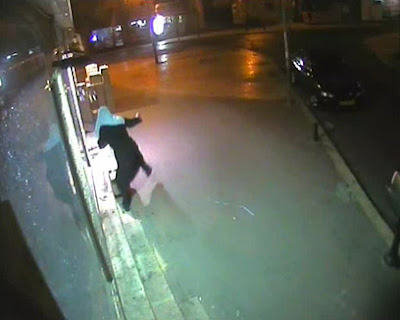 The windows of a modern [Orthodox] bookstore in the ultra-Orthodox neighborhood of Mea Shearim in Jerusalem were smashed last week by two masked people. Security camera's documented the two approaching the shop and damaging it.

According to one of the store managers, one of the assailants watched his friend as he shattered the window with an emergency hammer, which was likely stolen from an Egged bus.

The Yedioth Jerusalem weekly reported recently of ongoing attacks against haredi shop owners refusing to obey the modesty demands of an extremist faction.

This isn't the first time the "Or Hachaim" store has been vandalized, and its owners are considering replacing the doors and windows from glass ones to steel ones.

"We believe the police are not doing enough about this," says one of the store workers. "After the incident a patrol car arrived, but didn't even wait for me to come. They left the security guard a form to fill out a complaint and left."

The bookstore chain plans to turn to a lawyer in a bid to launch legal proceedings against the police's "helplessness and idleness."

"We are being abandoned," says one of the store managers.

The police said in response, "An investigation has been launched. In addition, we are conducting extensive intelligence activity, which will soon bear fruit."
Posted by joe levin at 8:18 PM