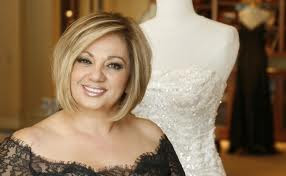 Simin’s reputation for detail, extravagance and expert, feminine tailoring have won her high-profile following, cementing her reputation when she became creator of ‘the world’s most expensive wedding gown’.

The bells at the door tinkle, and the fashion designer Simin jumps up from a velvet bench and politely excuses herself. Outside her 4,000-square-foot Robertson Boulevard studio, a leggy brunette steps out of a Lincoln Town Car. Lisa Vanderpump, the British-born actress and restaurateur, better-known as one of the six “Real Housewives of Beverly Hills,” has arrived for the final fitting of a gown she will wear to her daughter’s wedding this weekend.

True to her nickname, “Pinky,” the gown is a long, satiny, light-pink strapless, with hand-beaded Swarovski crystals adorning her décolletage. A second dress — with a tight-fitting bodice in navy-blue lace and a skirt that flares at the calf — Vanderpump plans to wear to “The Real Housewives” Season 2 premiere.

For Simin, an Iranian-born dressmaker, haute couture provides exclusive assurance: “It’s one of a kind,” she says breezily. The French term meaning “high sewing” or “high dressmaking” was introduced in Paris in the mid-19th century and today is guarded by a strict set of standards that admits only the most exclusive fashion houses in the world, including Chanel, Christian Dior and Jean Paul Gaultier.

Having studied in Paris under legendary couturiers Pierre Balmain and Pierre Cardin, Simin does her best to apply the principles of high fashion to her self-created storefront in Beverly Hills.

Simin’s reputation for detail, extravagance and expert, feminine tailoring have won her a high-profile following. She counts Paris Hilton, Paula Abdul and Ivanka Trump among her celebrity clients, and her dresses have become a fixture on the red carpet.

However, she cemented her reputation as a daring member of the design elite when she became the creator of “the world’s most expensive wedding gown,” a $19 million diamond-studded dress produced in collaboration with Beverly Hills jewelers the Kazanjian Brothers.
Posted by joe levin at 8:59 AM