Mother: Arielle Brooks enlisted the help of those in the local community to raise money for her 'sick' daughter 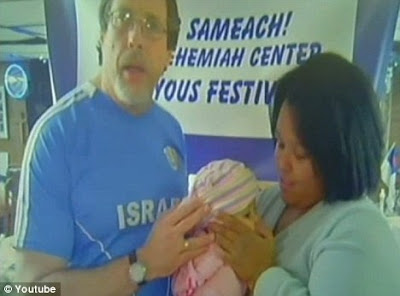 A mother has been accused of faking her 14-month-old daughter's cancer so she could scam generous donors out of thousands of dollars.

Baby Myah Brook's courageous battle with leukaemia tugged at the heart strings of anyone who heard about it and in turn, tugged at their purse strings.

Her mother, Arielle Lucinda Brooks, 22, set up a Facebook page and website to raise money for her medical bills and expenses.

A pastor of Lehigh Valley who heard about her illness even made a YouTube video and organised fundraisers at homes and restaurants in the community.

But now Northampton County District Attorney John Morganelli claims that he has proof that baby Myah is not actually sick and said her mother's arrest is 'just days away'.

At a press conference on Tuesday he said: 'There is a Baby Myah and we believe Baby Myah is a healthy child, thank God.'

Within days the mother, Arielle Lucinda Brooks, 22, who also uses the last names of Odom and Poor, will face allegations of theft by deception for a scheme that began shortly after her daughter was born 8 July, 2010, Mr Morganelli said.

The only reason they were announcing the deception before any charges were filed is because a fundraiser for Myah had been organised for Tuesday night and he did not want anyone else donating money to the family.

He said: 'This was continuing to go on even though this individual knew she was the subject of this investigation.'

Pastor George Cook who has been largely involved in her fundraising and made a YouTube video about Myah for the family urging people to join a national bone marrow registry.

He told NBC: 'It's like looking at the Jerry Lewis telethon. You wouldn't question them. I didn't even think to ask if her child was really sick. I had no doubt about her story.'

Mr Morganelli said the investigation began after his office received an anonymous tip on September 6.

He was told that a mother was raising large sums by claiming her child was terminally ill with juvenile leukaemia and aplastic anaemia, a rare bone-marrow disease.

The informant had seen the baby on 'numerous occasions' and believed she had no health problems.

Mr Morganelli said that detectives then launched an investigation and confirmed that there had been a number of investigations and that the baby was not ill.
It is believed she raised more than $10,000.

Mr Morganelli said that Brooks and her family are poor and may be on public assistance so donators would probably not see their money again.