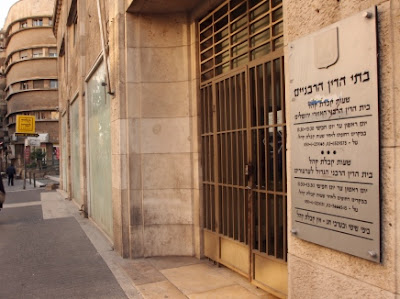 Netanya, Israel - A woman whose husband fled the country just two days after their wedding two years ago has had her marriage annulled by a private Orthodox rabbinical court.

The man, referred to as Yud, absconded to the US and then demanded his wife pay NIS 40,000 before he would grant her a bill of divorce.

In Jewish law, a man must willingly grant the bill of divorce, or “get,” before a woman can remarry and have children.

The woman, Shin, turned to the Rabbinical Court of Netanya, one of the 12 local rabbinical courts of the state rabbinical courts network, and requested that the marriage be annulled since it was clear, she argued, that her husband never intended to live with her and had planned to flee to the US before the wedding.

The rabbinical court refused to take this step, however, and so Shin turned to an independent rabbinical court comprising three well-known Orthodox rabbis: Rabbi Avraham Dov Levine, a haredi rabbinical judge and president of the independent Jerusalem Rabbinical Court for Property and the Clarification of Jewish Status in Mea She’arim; Rabbi David Bigman, head of the nationalreligious Ma’aleh Gilboa Yeshiva; and Rabbi Michael Avraham, a lecturer at Bar- Ilan University.

The convening of this independent court was initiated by Mavoi Satum, a divorce rights lobbying group.
The independent court ruled that although a get was preferable, the attempted extortion by Yud should not be tolerated.

“We have unanimously decided that their marriage is annulled, and the woman is permitted [to marry],” wrote the rabbinical judges in their ruling given last month but published only this week. “It is preferable that a get be given, but there is no need or justification whatsoever to pay for the get. In a case of extortion, it is possible to annul the marriage without a get.”

Mavoi Satum believes that the ruling proves that there is within Jewish law the means, in certain cases, to annul marriages and prevent long-term suffering to chained women whose husbands refuse to grant a get.

The three rabbinical judges were, however, not entirely in agreement on the reasons for granting the annulment, due to several highly unusual aspects of the case.

Yud is a convert, but his conversion has been questioned, since it was done when he was a minor and he subsequently declared himself Christian.

Levine wrote that the main reason for his agreement to annul the marriage was that he considered Yud not to be Jewish.

Rabbis Bigman and Avraham wrote that it was clear that Yud had no intention of living with Shin, attested to by the fact that he was living with a different woman in the US.

Had Shin known that Yud had no intention of living with her, she would never have agreed to the marriage, and since marriage requires a woman’s consent, the marriage was invalid retroactively, wrote Bigman and Avraham.

Mavoi Satum will now seek to have Shin registered as single instead of divorced in national marriage registration records, although this will certainly be refused, since the state rabbinical court’s system does not recognize the authority of independent rabbinical courts.

The local rabbinical court in Netanya has succeeded in securing a get from Yud, but only after paying him the NIS 40,000 from state funds.

Even so, Shin will still only be able to register as a single divorcee and not merely single in the state marital status records.

Mavoi Satum has stated that in this case it will appeal to the High Court of Justice for recognition of the ruling of the independent court and the validity of such rabbinical courts in general.

In particular, the organization will point out that the rulings of independent haredi courts are frequently accepted by the state rabbinical court system regarding divorce and other issues.

The Jerusalem Post
Posted by joe levin at 7:01 AM