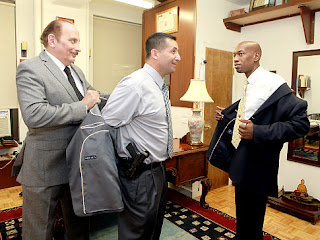 When he was growing up in Brooklyn, everyone called him Stew - but these days, he's simply known as Suit Man.

"I'm the only Suit Man, the one and only, that does what I do," boasted Stewart Altschuler, 57.

His specially designed jackets have side and back slits that allow easy access to weapons - yet hang close to the body to hide the radio, badge, handcuffs and gun that detectives carry.

The pants have a second layer of fabric from the knee down to help keep them from fraying.

"In an Armani suit, you can't move like this," said Altschuler, a martial-arts fanatic with no law enforcement background.

Before detective garb, he sold raincoats.

He attends the Detectives' Endowment Association's monthly meetings at Russo's on the Bay restaurant in Howard Beach, Queens, in hopes members will invite him back to their home precincts.

"You get to know [the reps] and they give you a sense of who wants what," he said.

The threads are manufactured in China and range from $190 to $225. Altschuler estimates he's sold thousands of suits to hundreds of city detectives, private security guards and New Jersey state troopers.

"We get a lot of insurance salesmen come in and those guys...got no personality. They give you their rehearsed testimony and that's it," said Queens Sgt. Mark Albarano, a detective in Jamaica's 103rd Precinct, who bought his first Suit Man ensemble five years ago.

Retired Detective Michael Bell, 44, who spent 16 years in Brooklyn North Narcotics, remembers meeting Altschuler five years ago at a picnic on Staten Island. He bought a 42-long that day.

"You see movies about New York City detectives, not California detectives. These suits help you look the part," said Bell, who owns eight Suit Man suits and has referred dozens of detectives to Altschuler's 35th St. office in Manhattan.