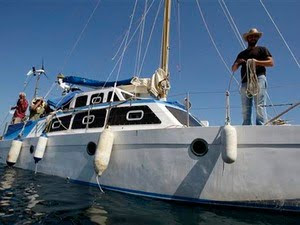 IDF takes over boat carrying nine activists after warning passengers not to proceed to Strip. 'We are surrounded by 10 Navy ships,' one of activists tells Ynet before non-violent raid. Catamaran making its way to Ashdod Port

The captain of a catamaran carrying Jewish activists toward the blockaded Gaza Strip said Tuesday his boat was approaching the shore. He warned that an Israeli warship was nearing the small vessel.

The IDF announced informed the captain that he will not be allowed to proceed to Gaza, and that troops would raid the small boat only if it tried to breach the blockade, adding that such a takeover could result in casualties.

"We are surrounded by at least 10 Navy ships. They are probably going to collide with us any minute," one of the activists, Rami Elhanan, told Ynet.

"They are demanding that we stop and threatening that if we fail to do so, it may end with casualties. We are moving forward in full force, hugging each other and singing songs," he added.

Captain Glynn Secker said he expected the navy to intercept the Irene, which is carrying nine Jewish activists from Israel and other countries.

"We will not obey them, we will not help them," Secker said. "But we will not confront them physically. We will engage in no violence."

In the end, Secker predicted, the catamaran will be towed to the southern Israeli port of Ashdod, as has happened with other blockade-busting ships.

Itamar Shapira, brother of Yonatan Shapira, an ex-pilot from the Israeli Air Force and a known anti-Israel activist, spoke to Ynet from the boat at 9 am Tuesday morning and said he expected to arrive in Gaza within three hours.

"We are carrying flags with the names of all the people who wanted to be here but couldn't," he said.

The army said it was not expecting physical resistance from the crew, and officials surmise that they will agree to dock at Ashdod port.

"The IDF has not spoken to us yet, but we have understood that it declared it would stop us 40 kilometers from the shore," said Shapira. "Members of the Free Gaza campaign, TV cameras, and a warm welcome await us on shore, so we hope to reach it."

'We slept like babies'
The catamaran set sail from Cyprus on Sunday with Jewish activists from Europe and the US on board. Rami Elhanan, who lost his daughter in a Jerusalem terror attack in 1997, said it had been a pleasant sail.

"We slept like babies, because we have a clear conscience," he said. "We are singing, dancing, and telling old Jewish jokes."

One of the organizers of the sail is Dr. Edith Lutz, a German specialist in Jewish studies and a nurse. She succeeded in reaching Gaza in a flotilla that sailed there in 2008.

"We are not alone. We have many supporters. We have heard from the media that we will be stopped, but we come in peace, bearing nothing but love."

Reuven Moskowitz, an 82-year-old Holocaust survivor, said the crew members were in high spirits. "I'm sorry to have angered the truth-tellers in Israel," he said.

"We are an extraordinary people. We are only sorry that they plan to stop us and remind everyone that a true hero is one who tries to turn an enemy into a friend," Moskowitz added.

"In any case we refuse to recognize the IDF's right to arrest us in Gaza's territorial waters when all we want to do is bring them harmonicas, toys, and some medicine."

He added that the crew members would not use force against the soldiers if they indeed raid the boat
Posted by joe levin at 6:17 AM