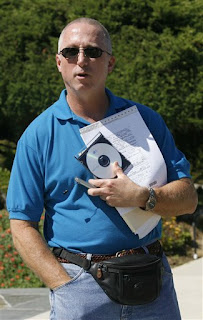 Los Angeles, CA - The Los Angeles sheriff’s deputy who arrested Mel Gibson for drunken driving in 2006 sued his department on Tuesday, claiming he has since been ostracized and passed over for promotions by the agency.

Deputy James Mee’s lawsuit seeks unspecified damages for loss of income, benefits, medical expenses and for emotional distress and mental suffering. Mee, who is Jewish, claims he was forced by his superiors to remove references to anti-Semitic slurs uttered by the actor-director during the arrest. Part of that report containing the slurs was leaked to the celebrity website TMZ.com, which also first reported the lawsuit.

Mee claims he was transferred after Gibson’s arrest and has not been awarded promotions to a traffic investigator or motorcycle deputy position because of the alleged discrimination. The lawsuit claims the department violated its policies by taking four years to investigate the leak and that has hurt Mee’s ability to be promoted.

“The whole story is not being told in this lawsuit and we look forward to telling it,” Whitmore said. “It has nothing to do with religious discrimination. We categorically deny those allegations.”

Mee was the subject of a criminal investigation into the leaking of his initial report. The Los Angeles district attorney’s office declined to file charges against the deputy.

Mee joined the sheriff’s department in May 1989, according to his lawsuit.

In addition to stating that he was forced to alter his report on Gibson’s arrest, the lawsuit claims one of his sergeants erased a videotape taken of Gibson in a booking area.

Mee’s attorney, Etan Z. Lorant, said the video was taken with a handheld camera and showed Gibson uttering religious slurs. The filing claims the deputy was discriminated against after complaining about the taping and being forced to change his initial report on the arrest.

Whitmore said none of the evidence taken during Gibson’s arrest had been destroyed.

Lorant said Mee, 55, wants his reputation with the department to be restored and he hopes the lawsuit will resolve that.

Gibson apologized for his anti-Semitic tirade after his arrest, saying that he had battled alcoholism for all of his adult life. He complied with all the terms of the probation given in the drunken driving case, and his conviction was expunged last year.

The Academy Award-winning director and actor has been embroiled in a bitter custody fight with his ex-girlfriend, Oksana Grigorieva, over their infant daughter. Grigorieva said Gibson physically abused her in January and the sheriff’s department turned over its investigation of her complaint — made months after the incident — to the district attorney. Grigorieva remains under investigation for possible extortion, which Gibson claimed after the custody case was filed.
Posted by joe levin at 4:43 PM