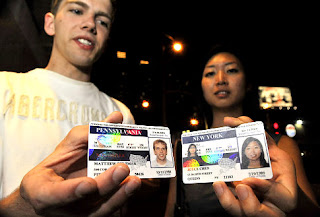 The bartender studied the phony Pennsylvania ID card for about 10 seconds before bursting into laughter.

"This is the worst fake I've ever seen," he said - and then served the bogus card's owner a cold beer.

The shady transaction was no one-shot deal. A Daily News spot check of Manhattan nightspots showed the only thing easier than buying a fake ID is using it to buy a drink.

A pair of News reporters - legally old enough to drink - hit 18 bars this weekend and were admitted or served in 13. Both were able to score sham "emergency IDs" at a Chinatown shop for $108 - with barely a 10-minute wait.

The intensity of the ID checks varied wildly from bar to bar.

Some places had bouncers working the doors, others none. Some inspected the cards intensely, others with a quick glance. Some went high-tech, others decidedly low-rent.

At Tenjune and Cielo, a pair of Meatpacking District hot spots, bouncers used scanners and flashlights to examine the IDs before barring the card-carrying reporters from entering.

"I can't do this," said the bouncer at Tenjune, where 17-year-old Nicole John was drinking before her fatal fall from a midtown high-rise last month. "It's a fake."

The same was true at Pacha on W. 46th St., where the Pennsylvania ID was instantly rejected.

"We don't take that here," the bouncer said dismissively.

There was better luck at bars in Hells Kitchen and in the neighborhood around W. 14th St. The chuckling bartender at Bill's Bar and Burger on Ninth Ave. had no problem serving one reporter after mocking his fake ID. Fake ID at the Mercury Bar at 46th St. and Ninth Ave.? No problem.

At the Tanuki Tavern on W. 13th St., the bartender was initially suspicious of the bogus ID - but wound up offering the reporter a shot on the house.

Getting the laminated cards was relatively easy at the Chinatown operation, where the shop workers were eager to help.

When one reporter provided her birth date as 1990, a sharp-eyed employee quickly changed it to 1989 - making her "legal."

Robert Bookman, counsel to the New York Nightlife Association, said keeping underage drinkers out of bars is a constant battle against determined teens and evolving technology.

"We're trying to put as many fingers in the dike as possible," Bookman said. "But kids come up with better ways to beat us. And the fake ID makers are coming up with more and better fake IDs."

Perhaps the biggest problem: Possession of a fake ID comes with no penalties in New York. The IDs are confiscated by the hundreds, but there's no fine or criminal charges, he said.

"We're always just one headline away from a nightmare," Bookman said, without mentioning John's death.
Posted by joe levin at 5:54 PM

Email ThisBlogThis!Share to TwitterShare to FacebookShare to Pinterest
Labels: nydailynews.com