K-Rod arraigned for violating order of protection against gal pal 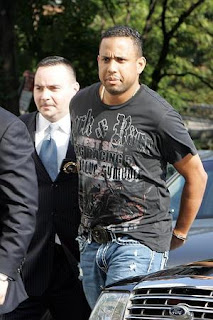 Francisco "K-Rod" Rodriguez in handcuffs at central booking in Queens
Mets reliever Francisco Rodriguez surrendered to authorities this morning and was arraigned on criminal contempt charges after violating an order of protection.

K-Rod, suffering through a career meltdown, allegedly beat up his girlfriend’s father inside Citi Field last month and then violated an order of protection by sending 56 text messages to his estranged-ex, Daian Pena, over the span of a week.

“I know this message could get me in trouble again, but I already lost you, my house and my children,” Rodriguez wrote. “Daian, I understand that perhaps I made a mistake, the biggest mistake of my life for doing what I did but I love you.”

The new charges were announced last week after he was accused of assaulting his girlfriend's father outside a family lounge at Citi Field.

"Thank you for sinking me and turning your back (on me)," he said in another text.

“He’s not naive or loving. He’s manipulative and controlling,” he said.

But Judge Ira Margulis ordered K-Rod post $7,500 bail, which he is expected to make this afternoon.

Prosecutors said K-Rod's gal pal had an order of protection against him in Venezuela after allegedly beating her up there.

The 28-year-old reliever was also accused of grabbing 53-year-old Carlos Pena, hauling him into a tunnel near the family lounge beneath the team's new ball park and hitting him in the face
Posted by joe levin at 2:16 PM