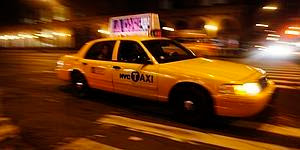 Over 50 of the worst cabbies who allegedly ripped off riders during a widespread overcharge scandal were arrested by the Manhattan DA's office in a massive roundup today.

All of the drivers are considered the "worst of the worst" in the "rate 4" scam, where hacks charged riders the double-fare suburban rate while ferrying people inside city limits.

Some of those arrested will be charged with felonies, others with misdemeanors.

Manhattan DA Cy Vance said 59 drivers were busted for defrauding and stealing from customers over a 20-month period.

Cabbies are suspended until the outcome of prosecutions

"Although these drivers stole from their customers a few dollars at a time, these scams amounted to a massive fraud that cast suspicion on an industry that is a vital part of our life and economy," said Vance.

Law enforcement authorities pulled off the dramatic roundup by sending out a widespread letter instructing the scam-hacks to go to Taxi and Limousine Commission headquarters at 40 Rector Street this morning.

Authorities said the worst offender was a hack named Santiago Rossi, 66, of Hollis, Queens, who overcharged riders to the tune of $11,066.45 over the course of 5,127 trips.

If convicted, the drivers face up to four years behind bars.

So far, taxi brass has dropped the hammer on thousands of hacks accused of deceptively overcharging riders on a smaller scale, slapping them with hefty fines and revoking licenses from the worst offenders.

The unique scam ripped riders off to the tune of $1.1 million during the course of 286,000 trips.

Seth Katz, a lawyer for two cabbies who turned themselves in today, said he was told yesterday that arrest warrants were out for his clients.

"We're talking about a very small dollar amount over a protracted period of time," he said. "If it was fraud, it would be during a shorter period of time, for a larger amount."

Have a period of two or three years, he said, totaling no more than $3,000. His clients told him it was either that the meter wasn't working or they inadvertently pushed the wrong button.

"They're nickel and diming," he said. "They take thousands of fares a week."

Bhairavi Desai, head of the New York Taxi Workers Alliance, agreed, saying, "We still question what evidence the DA has when all of this is based on a technology known for misreporting and breakdowns."
Posted by joe levin at 2:13 PM