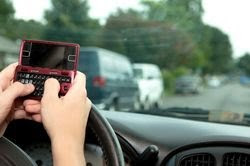 A dopey young Brooklyn woman who was texting while driving crashed into a scooter-riding deliveryman, leaving him clinging to life, police said yesterday.

Nechama Rothberger, 19, was driving a 2005 Toyota Camry on Avenue P in Midwood at 11:30 Sunday night when she plowed into Tian Sheng Lin, authorities said.

The 53-year-old deliveryman was stopped at a red light near East 17th Street when he was rear-ended, police said.

The impact sent the father of three flying.

He suffered severe head trauma and was rushed to Kings County Hospital, where he was declared brain dead, authorities said.

"My dad did everything for his family. He always took care of us," said his heartbroken 19-year-old daughter, Anna.

The victim works at Best China Restaurant, located a few blocks from the accident scene.

At her arraignment last night, prosecutors said cops found her cellphone in the car with a half-written outgoing message.

Rothberger's lawyer, Lee Kimmel, said his client "didn't hit him intentionally. It was merely an accident."

Both Rothberger and her mom declined to say if she was sorry as they left Brooklyn Criminal Court. But Kimmel said, "Of course she's sorry."

Then, asked by reporters -- unaware of the brain-death declaration -- if Rothberger planned to visit Lin in the hospital, Kimmel said she'd send a letter.

The accident was the latest in a series of smash-ups that law-enforcement officials have blamed on texting while driving.

A study last year by the Virginia Tech Transportation Institute found that drivers who text are 23 times likelier to crash or come close to having an accident than non-texters.

In November, New York passed a law that set fines of up to $150 for those caught texting while driving.

But under the law, the fines can be imposed only for texting as a secondary offense -- that is, if the driver breaks another law while texting.
Posted by joe levin at 8:49 AM