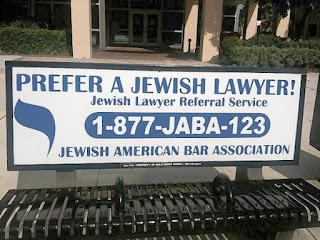 The Jewish American Bar Association caught the attention of local attorneys with a bus bench ad outside the Broward County Courthouse. The ad has been removed. (David Shulman, Courtesy / September 27, 2010)


Boca Raton, FL - When you go to court, do you want a Jewish attorney representing you?
That’s what a new Boca Raton business called the Jewish American Bar Association hopes, offering to connect people with legal problems to Jewish lawyers. The business has caught the attention of some attorneys in South Florida who are offended by its advertising and worried people may think it’s a concerted effort by Jewish attorneys to play on stereotypes to get clients.

The Jewish American Bar Association first caught the attention of local lawyers this month with an advertisement on a bus bench near the Broward County Courthouse that exclaimed “Prefer a Jewish lawyer!” and offered the business’ phone number.

Social worker Lisa Spitzer said she came up with the idea of the Jewish American Bar Association, incorporating the business last year. She said it acts as a legal referral service for people who are more comfortable having a Jewish attorney.

“If an all-women’s medical group posted an ad ‘Prefer a woman gynecologist?,’ would that be offensive?” said Spitzer, who is not a lawyer.

She acknowledges the group has only three members in South Florida. She said she would allow a non-Jewish attorney to sign up for the referral service “if his heart was in accordance with our goals and purposes.”

The Jewish American Bar Association’s website had a post office box in Boca Raton listed as the address of its main office until the Sun-Sentinel began making inquiries. The website now just says to “send all inquiries” to the post office box.

Spitzer’s business took down the bus bench ad after Fort Lauderdale attorney David Shulman complained about it on his blog.

Shulman said he was taken aback when he first saw the bench ad, calling it “shockingly stupid.”

“I felt it played on certain stereotypes of Jews,” Shulman said. “I know a lot of lawyers both Jewish and non-Jewish and some are good and some are bad. I don’t think using someone’s ethnicity is fair to determine whether they are a good or a bad lawyer.”

Litigator Richard Sachs said he’s worried about the message people would take away from the Jewish American Bar Association’s advertisements, especially following the recent judicial elections in Broward County. Some of the candidates challenging incumbents were accused of trying to use their Jewish-sounding last names to win over voters.

“It [JABA] implies a Jewish attorney is better than a non-Jewish attorney, and that can’t help the legal community at large,” said Sachs, who also is president of the B’nai B’rith Justice Unit of Broward County, a group of about 200 Jewish lawyers and attorneys. Sachs said his comments were on his own behalf.

He also questioned whether Spitzer is misleading people into thinking her business is a national organization of lawyers, rather than a referral service run by a non-attorney.

There don’t appear to be any laws that block an organization from calling itself a “bar association,” according to the Florida Bar, the statewide lawyers’ organization.

If the Florida Bar finds any problems with the advertising, the three lawyers registered with the service would be held responsible, Walker said.

Spitzer said attorneys will have to pay annual dues of about $325 to be part of her organization.

“Any time a new concept appears, you have to expect to be whacked,” she said. “I think this thing has wings and it has a lot of potential.”
Posted by joe levin at 10:02 PM