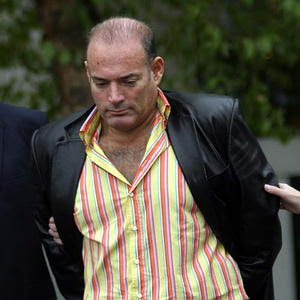 After an eight-month trial and two weeks of deliberations, a jury found a Long Island body armor mogul guilty yesterday of looting millions from his company and shareholders to fund an extravagant lifestyle.

David Brooks was convicted on 17 counts, including conspiracy to commit securities, wire and mail fraud, obstruction of justice and insider trading. He faces up to life in prison. His former chief operating officer, Sandra Hatfield, was convicted of related charges.

He wore a $100,000 diamond-encrusted belt buckle fashioned as an American flag. Brooks also spent his millions on horse-racing interests, prostitutes, shopping sprees, trips to the South of France and luxury cars.

The duo cleared $190 million -- with $185 million going to Brooks -- after dumping their inflated shares. The stock plummeted after their exit, and shareholders were wiped out
Posted by joe levin at 10:57 AM