Nutjob is crazy for you Madge! 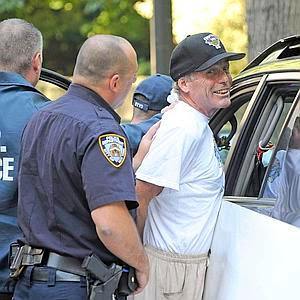 His love for Madonna went over the borderline.

A 59-year-old retired FDNY firefighter yesterday was busted for the second time in four days outside Madonna's Upper West Side apartment, where he displayed signs professing his love for the pop icon.

The answer conveyed by Madonna's security people was a definite no. Cops wound up handcuffing Linhart and hauling him to the 20th Precinct station house.

"We thought he was homeless. But then we saw he had a car," said Angel Melendez, a security guard in the neighborhood.

The Toyota SUV contained artist equipment, a firefighters' uniform and a Paris tour guide. One of Linhart's signs suggested he has traveled widely to stalk to the aging pop star. It said he'd seen Madonna "this year" in Prague -- she gave a concert there in 2009 -- and added, "Meet me, please."

Linhart retired from the FDNY in 1998, a department spokesman said.

For at least the past decade, he has lived in Huletts Landing, NY, a rural town on Lake George.

He's only the latest in a long line of wacky Madonna-wannabe beaus.

A bodyguard in the 1990s shot and wounded Robert Hoskins, who stalked her in California and threatened to slice her "from ear to ear" if she didn't become his wife.

Madonna testified at Hoskins' trial in 1996, despite admitting that being in the same room with him made her "sick to my stomach."

Hoskins was sentenced to 10 years in prison.

When Madonna performed in Madison Square Garden in 2004, security guards ejected an alleged stalker who had bought a ticket to the show.

And in 2000, her then-boyfriend, movie director Guy Ritchie, was accused of assault in London for slugging a stalker who admitted he was "a bit obsessed" with the star.
Posted by joe levin at 8:24 AM