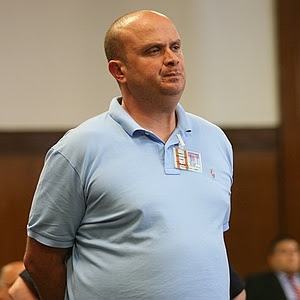 The "arrogant" ringleader of a $100 million mortgage scam will spend at least eight years behind bars for his part of a massive, brazen land con, a judge ruled today.

Aaron Hand, the 38-year-old former president of AFG Financial Group, was sentenced to 8 1/3 to 25 years for his convictions on enterprise corruption, scheming to defraud, conspiracy and grand larceny.

``Mr. Hand, not at this moment, but at times I have observed, could be a rather arrogant fellow,’’ said Manhattan Supreme Court Justice Carol Berkman. ``Mr. Hand, like some of his co-defendants, made a lot of money, lived very high. I guess that’s part of the arrogance.’’

Assistant DA Harold Wilson said Hand and his buddies played a significant role in the collapse of the real estate market that had huge ripple effect on America’s overall economy.

``The result was immeasurable,’’ said Wilson, who compared Hand's operation to a company that dumps toxic material and poisons the water supply. ``Your honor, they’re not much different from a corporate polluter.’’

Hand’s defense lawyer Lee Ginseberg could only argue that prosecutors piled on charges that unfairly amplified his criminals acts.

``Ten, 20, 40 counts, it doesn’t change the nature of the underlying conduct,’’ Ginsberg said.

DA Cyrus Vance said the four defendants deserved every year of prison time they got.

“Crime was the business of AFG – these four defendants went to work every day with the intent to commit mortgage fraud; it was literally their job,” said Vance. “This scam would not have been possible without the contributions of these four defendants, who each played an integral role in the formation and daily activities of the company.''
Posted by joe levin at 8:37 PM